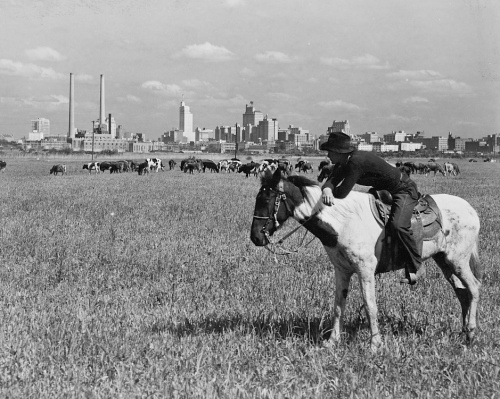 Back in 2014 when I started this blog, this is one of the first photos I posted. It is one of those Dallas photos that can actually be described as “iconic”: a cowboy on horseback watches over a herd of cattle grazing just beyond a vibrant mid-century skyline — old Texas meets new Texas. The photo is by Dallas photographer William Langley, and, according to the Library of Congress, it was taken on August 20, 1945. I am posting it again today, August 20, 2020 — 75 years to the day it was taken.

So what was happening 75 years ago today? Here are a few stories from the newspaper.

Gen. Douglas MacArthur was heading to Japan (Hiroshima and Nagasaki had been bombed within the past two weeks, effectively ending the war).

Wartime restrictions on the use of natural gas were lifted by the War Production Board.

LBJ was being touted as a possible candidate for Texas governor.

Dallasites were chomping at the bit to bid farewell to the war-ordered Daylight Savings Time and return to Standard Time — they wanted go to bed when it was dark outside.

Annexation had meant that Dallas had increased in size over the past year from 51 square miles to 87 square miles.

Sgt. Jesse Curry, 31, of the Dallas Police Department, had been awarded a fellowship for an 18-week course in traffic administration at Northwestern University Traffic Institute in Chicago.

It was announced that improved trash pickup was on the horizon, as soon as new trucks became available.

War workers were being released from their war-work obligations, and the city’s businesses were beginning to hire, which was good news, except for many Dallas women who were still working but who were met with the announced closure of many “playschools” which were operated around the city on a 12-hour cycle to accommodate shift workers.

The Texas League announced they would resume minor league play in the spring.

Hockaday would increase its staff from 83 members to 100 for the upcoming school year.

“The Three Musketeers” was opening at the Starlight Operetta in Fair Park. The State Fair of Texas would not resume until 1946.

“Thrill of a Romance” — with Van Jones and Esther Williams — was at the Majestic.

“Pillow to Post”  — with Ida Lupino and Sydney Greenstreet — was at the Palace.

“The Story of G.I. Joe” — with Burgess Meredith and Robert Mitchum — was at the Tower.

“Asi Se Quiere en Jalisco” — with Jorge Negrete — was at the Panamericano.

Interstate Theaters declined to respond to the rumor that a soon-to-be-built theater in Galveston was to be equipped to show television broadcasts.

High temperature on the Monday Bill Langley took that photo was 92 degrees.

Photo by William Langley — titled “Skyline, Dallas, Texas” — is from the collection of the Library of Congress. Langley appears to have been positioned somewhere around the present-day Stemmons Corridor.