“Be sure and meet me…” (click for larger image)

“Tell your friends
You’ll meet them in Dallas,
In the town
Where there is no malice.”

Yes, those immortal lyrics are by Jack Gardner, a musician, bandleader, and an “entertainment manager” at the tony Adolphus Hotel. For some reason, he was chosen as the man to write a persuasive ditty which (it was hoped) would sweep the country and lure the 1916 Democratic National Convention to Dallas. Sadly, the song did not set the world (nor Democratic loins) on fire, and (spoiler!) St. Louis got the convention.

As we see above, the mayor-approved city-jingle was issued with sheet music cover art by Dallas Morning News cartoonist John Knott and a great background photo of downtown, with the Adolphus and Busch Building (now the Kirby Building) featured prominently.

If you’d like to wallow in the vamp-y march that IS “Meet Me in Dallas,” the sheet music has been scanned in its entirety by Baylor University here. You can play it and sing it in the privacy of your own home!

If you would like to read about how the Texas Democratic Party was hoping to snag the national convention with this song, you can read about it in this article by Paula Lupkin that appeared in the Fall 2012 issue of Legacies.

And, lastly, a little check-in with Jack, to see what he was doing years later in 1938. This blurblet from St. Petersburg’s Evening Independent has him in Florida, working as a traveling musician with his dance band, settling into a one-week gig at the Detroit Hotel. Not only has he persuaded the anonymous reporter that his name is “synonymous with good dance music in the Southwest,” but he still seems to be resting on his long-faded “Meet Me in Dallas” not-quite-brush-with-the-big-time laurels. 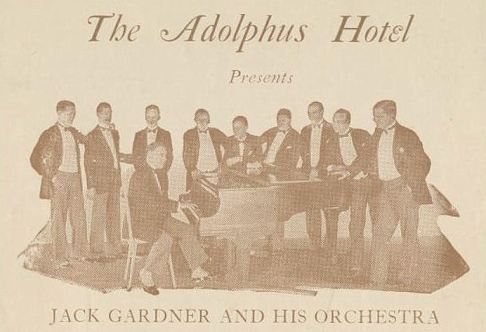 Photo of Jack Gardner and His Orchestra is from the wilds of the internet.

I’m sure Mr. Gardner’s ditty was the bee’s knees, but it’s not to be confused with the wonderfully seedy 1969 country song of the same name by the fabulous Jeannie C. Riley (read about that song here).