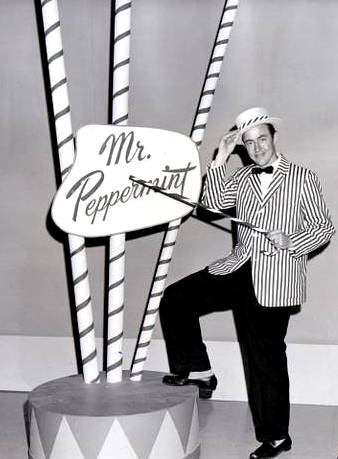 I had no idea that the “Mr. Peppermint” theme was by Henry Mancini! It’s from a 1960 movie called “High Time,” which, I have to say, I’ve never heard of. It starred Bing Crosby, Fabian, and Tuesday Weld (I kind of think Bing may have been in it solely for the paycheck). Check out the movie’s main theme music. Sound familiar?

Hearing this brings back a flood of happy memories — an aural version of Proust’s madeleines.

In a recent Los Angeles Times interview, Paul Reubens (aka Pee-wee Herman) had this to say:

I ran into Jerry Haynes (aka Mr. Peppermint) several times around town over the years. The first time I saw him, I was in my 20s, and he was doing some sort of promotion (in character) at a store in, I think, Northpark. I was unaware that he would be there, but when I saw him at the top of the escalator, I was shocked. My childhood TV pal right in front of me! It’s a bit of a blur, but I think I giddily foisted myself on him and told him all the things other Dallas kids raised on his show probably told him. I might even have gushed an involuntary “I love you, Mr. Peppermint!” Yikes. I bet he got that ALL THE TIME. He was very sweet and didn’t treat me like a crazy person.

The last time I saw him, he was just Jerry Haynes, shopping for cheese at the Tom Thumb on Mockingbird and Abrams. I didn’t bother him, but I still got a little happy jolt of recognition when I saw him.

And now I find out that the composer who wrote so much of my favorite movie music wrote the music so tied to my childhood. Thanks, Mr. Mancini! Thanks, Mr. Peppermint! Thanks, Mr. Wiggly Worm!

(Thank you, Steve S., for bringing this to my attention!)