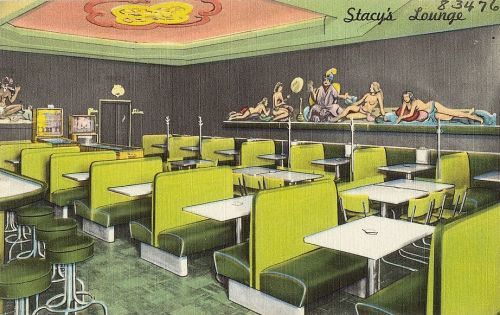 Stacy’s has it all: murals, pinball, ashtrays

Today: a quick look back at a short-lived bar, Stacy’s Lounge, once located along the famed Miracle Mile. Actually, this postcard may be about all that remains from what was, apparently, a fairly short-lived drinking establishment.

The above line is from the 1951 city directory, but that listing appears to have been published posthumously. By November of 1950, Stacy’s space at 5721 West Lovers Lane had been taken over by another bar called The Magic Lounge (later the Magic Grille/Herb’s Magic Grill).

Stacy — whomever he or she was — was not afraid of color and decor. I mean … for one thing … those murals. The exotic scenes featuring bare-breasted women, men in turbans, and, I think, a cobra are a little unexpected. They’re either great or awful. Patrons in 1950 might have thought they were awful when they walked in, but by closing time, they probably thought they were … slightly less awful. And the colors! They’ve obviously been pumped up for the postcard, but I’m sure the two-toned green vinyl (great booths!) and the pink and yellow molded and recessed ceiling were attention-grabbing. Imagine it crowded, dark, smoky, and loud. I’ve been in old bars that kind of look like this, just grungier, scuffed up, and sagging. This is pretty much what your favorite dive bar looked like when it was new and shiny. (I just realized I’ve never seen a vintage postcard with a pinball machine in it. And a jukebox. And a cartoon Indian fakir. I’ve hit the trifecta!)

So what other businesses filled that block of Lovers in 1950-51? (Click for larger image.)

Speaking of The Miracle Mile (you don’t really hear people referring to the Miracle Mile anymore, do you?), when the name of the shopping area debuted in 1947, the official boundaries were Devonshire on the west and Douglas on the east. Some people insist it goes all the way down to the Inwood Theater. This rather adamant Dallas Miracle Mile Merchants Association advertisement illustration would disagree with that notion. 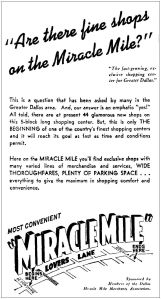 I’m still not sure why it was called the Miracle Mile, unless it had something to do with the price of real estate. Part of it was in Dallas (the couple of blocks west of what was the St. Louis and Southwestern/Cotton Belt railroad — now the tollway), and part of it was in University Park. (And I suppose still is.) Most of the bars and restaurants were in the Dallas portion, because University Park was dry. Another notable thing about Lovers Lane is that the address numbering is a crazy mess — there’s West Lovers Lane, Lovers Lane, and East Lovers Lane, and every time you pass from one stretch to the next, the abrupt address-changes will make your head spin. (I had no idea it was so crazy until I read Helen Bullock’s very informative and entertaining article about the Miracle Mile in a Sept. 10, 1961 article in The Dallas Morning News, “Walk a Miracle Mile.”)

But back to Stacy — I never actually discovered who Stacy was. Oh well. The particulars of Stacy’s Lounge may be lost to history, but the image of its colorful interior lives on in a 65-year-old garishly-colored postcard.

Postcard is from the great Boston Public Library Tichnor Brothers Postcard Collection on Flickr, here. I dip into the collection now and again to see what I can find out about those arresting and unreal-looking images — see those past posts here.

Currently at the old Stacy’s Lounge address (though in a newer building) is the Nicholson-Hardie Nursery & Garden Center; the location on a map is here.

You might even say that Stacy’s Lounge has got it going on. Do you have this song going through your head like I do? That’s going to be hard to get out of there.