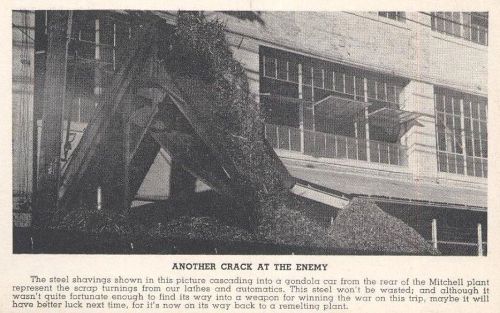 This is the second part of a post containing a series of postcards issued by the John E. Mitchell Company, which, before World War II was primarily a manufacturer of cotton and agricultural implements. It was located at 3800 Commerce in Exposition Park, a few blocks from Fair Park. During the war, the company ceased producing agricultural machinery and began producing munitions and materiel for the Navy and Army. (Part 1 can be found here.) The cards in a landscape format are larger when clicked.

The card at the top shows the back of the (still-standing) building, behind which ran railroad tracks of the Missouri-Pacific railway. The card’s text:

ANOTHER CRACK AT THE ENEMY

The steel shavings shown in this picture cascading into a gondola car from the rear of the Mitchell plant represent the scrapped turnings from our lathes and automatics. This steel won’t be wasted; and although it wasn’t quite fortunate enough to find its way into a weapon for winning the war on this trip, maybe it will have better luck next time, for it’s now on its way back to a remelting plant. 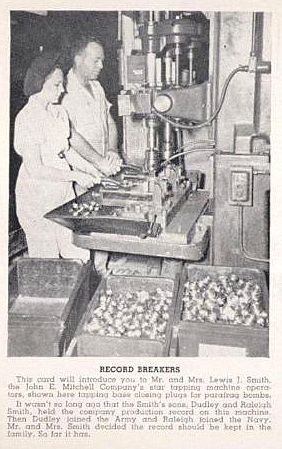 It wasn’t so long ago that the Smiths’ sons, Dudley and Raleigh Smith, held the company production record on this machine. Then Dudley joined the Army and Raleigh joined the Navy. Mr. and Mrs. Smith decided the record should be kept in the family. So far it has. 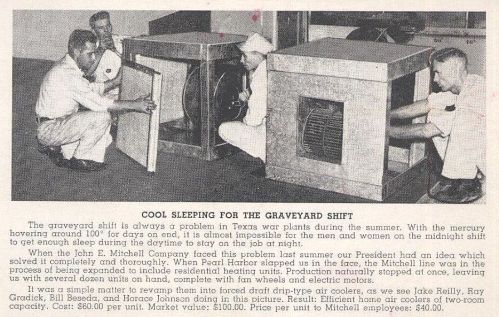 This is one of the most interesting cards in this collection. After the war, the Mitchell Company began to manufacture a wide variety of things, including heaters and air conditioners for cars. This problem of graveyard shift workers being unable to sleep during the summer months because of the oppressive heat must have been a big problem during the war, when factories such as this had to be running 24 hours a day. This was a brilliant solution.

COOL SLEEPING FOR THE GRAVEYARD SHIFT

The graveyard shift is always a problem in Texas war plants during the summer. With the mercury hovering around 100° for days on end, it is almost impossible for the men and women on the midnight shift to get enough sleep during the daytime to stay on the job at night.

When the John E Mitchell Company faced this problem last summer our President had an idea which solved it completely and thoroughly. When Pearl Harbor slapped us in the face, the Mitchell line was in the process of being expanded to include residential heating units. Production naturally stopped at once, leaving us with several dozen units on hand, complete with fan wheels and electric motors.

It was a simple matter to revamp them into forced draft drip-type air coolers, as we see Jake Reilly, Ray Gradick, Bill Beseda, and Horace Johnson doing in this picture. Result: Efficient home air coolers of two-room capacity. Cost: $60.00 per unit. Market value: $100.00. Price per unit to Mitchell employees: $40.00.

AND IT COMES OUT HERE

When the Navy told us that their rocket program called for three separate coats of lacquer on one of the parts, Joe Cauthen and his crew immediately went to work designing and building a special machine that would do the job automatically.

The machine picks up the parts automatically from the girl who gages them, gives them three separate coats of lacquer, and dumps them out into a box at the other end. In this picture, Joe Cauthen, Johnny Bell and Jake Reilly wait eagerly for their brain child to give out with the next one.

The good old U. S. Army and Navy custom of bestowing affectionate names upon planes, guns, ships, etc., seems to have been carried over to the production front here at the John E. Mitchell Co.

In this picture we see Claude Blacketer in action with his fork truck named Maude, which he handles much more efficiently than anyone else ever handled its mulish namesake. By handling 24 boxes at once, containing 96 airborne wing assault rockets, Claude loads a freight car in less than 2 hours.

Here is a close-up view of one of the Mitchell Company’s battery of multi-spindle automatic lathes. These machines, which cost about $25,000 apiece, perform the first operations on many of the company’s war items. They operate 24 hours a day under the expert care of men like George Alexander, shown here peeking through at an operation on rocket nozzles.

Here’s one of the many presses with which the Mitchell factory is equipped, each operatable with a series of interchangeable blanking, stamping, forming, and drawing dies. This particular press has a capacity of 300 tons and forms the end frame for a Mitchell cotton machine in one lick. 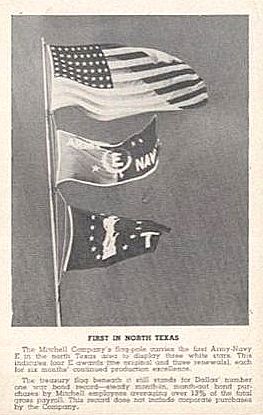 The treasury flag beneath it still stands for Dallas’ number one war bond record – steady month-in, month-out bond purchases by Mitchell employees averaging over 13% of the total gross payroll. This record does not include corporate purchases by the Company.

Postcards found on eBay. Many of these are currently for sale, here.

Part 1, containing more of these postcards, is here.

Coming next: a look at the building built by the Mitchell Company in 1928, which is still standing in Expo Park, now repurposed as residential loft space.