Bishop College was a historically black college founded in Marshall, Texas in 1881 by the Baptist Home Mission Society. The main building on the Bishop College campus was a grand plantation house built with slave labor in the late 1840s for the wealthy Holcombe family, who allowed it to be used during the Civil War it as the headquarters of the Trans-Mississippi Agency of the Confederate Post Office Department. That it became the home of one of the first institutions of higher education for African Americans in Texas seems almost poetic.

In 1961 — 80 years after its founding, Bishop College moved to the Highland Hills area of South Dallas, along Simpson Stuart Road, to become Dallas’ first black college. The move was made in a push to increase enrollment and was made possible by money raised by a group of Dallas businessmen headed by Carr P. Collins, Sr., by the American Baptist Convention, and by the Negro Baptists of Texas. Dallas businessman and philanthropist Karl Hoblitzelle donated the land. What started in 1961 as a 103-acre campus with only seven buildings and an enrollment of 651 students, grew to a campus stretching over 360 acres and a peak enrollment of about 2,000 students.

Despite its move to a major metropolitan area and an increase in enrollment, the college was never on firm financial ground. After years of financial mismanagement, charges of embezzlement, and mounting government debt, the college lost its accreditation and eligibility to receive further funds. In a last-ditch effort to remain open, the college filed for Chapter 11 bankruptcy in 1987, but they were never able to recover, and Bishop College closed in 1988 after 107 remarkable years. In 1990, the property was purchased by Comer S. Cottrell, who persuaded the powers-that-be of Waco’s Paul Quinn College — the oldest African-American college in Texas — to move to Dallas and take over the defunct Bishop College campus. Paul Quinn College has been operating in Dallas since 1990.

The photos below are from the 1969 Bishop College yearbook, back in its happier, groovier days of growth and progress. (Click to see larger images.)

Campus buildings, including the “homage” to the old Bishop administration building in Marshall, “Wyalucing.”

Above, Raymond Hall, who taught classes in African and American culture.

Above: “Energetic students got in the groove. Charles Hunt and members of the Bishop Collegians, the lab band, played and really socked it to the students attending the show. From the lab band has come four different groups which are worthy credits to the band and Mr. VanBolden, director.”

Below: “Theopolis Jones, a freshman from Birmingham, Ala., worked out on the drums. He was but one of the forty freshmen who were members of the Ambassadors of Band. Fellow members of the class stood by and looked on with real enthusiasm.”

Below: “Joyce Morris, a sophomore from Oklahoma, was one of the feature vocalists at the talent show which was sponsored by the Ambassadors of Band, the Bishop College Marching Concert Band.”

Concert choir, under the direction of John S. Meeks.

Staff of the college newspaper, the Bishop Beacon. 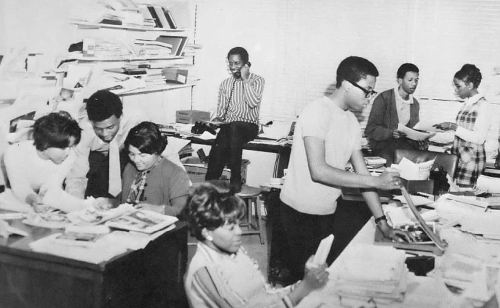 Zale Library “study-in” (note the 1968 mural by Louis Freund — see it in color, on the Paul Quinn website, here). 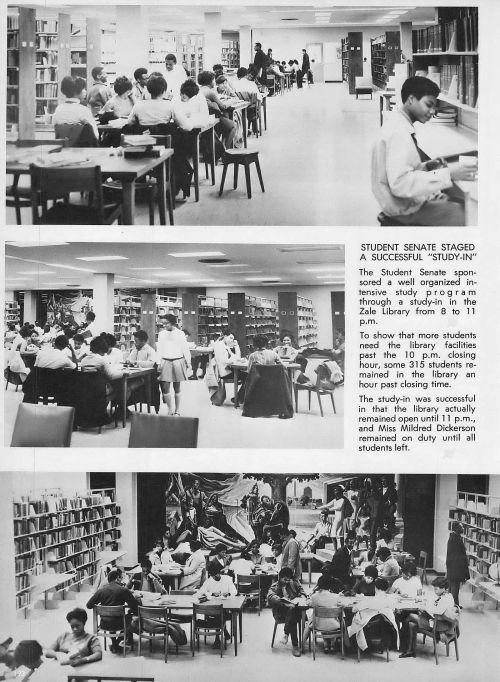 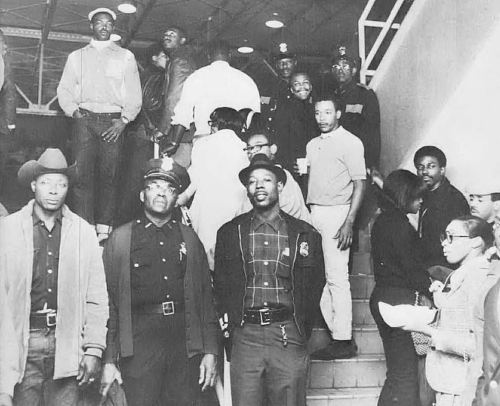 I love these two photos: above, campus security; below, a photo one would never guess was taken in the late 1960s, featuring two men who worked in the receiving department (Wesley Hayes and Roy Sallings).

Mrs. Annie Mitchell, mother of music teacher Maurine Bailey (who was a legendary instructor at Lincoln High School for many years), with be-ruffled students Harolyn Morris and Estella Parker.

Happy students on the hilltop. 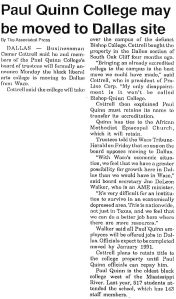 All photos from the 1969 Tiger, the yearbook of Bishop College.

More details on the demise of Bishop College can be found in the Dallas Morning News article “Where Did Bishop Fail? Those Involved With College Disagree on Cause of Fiscal Problems” by Sherry Jacobson (DMN, March 20, 1988).

All photos are larger when clicked.