The Buell Planing Mill — originally the Buell & Connelly Planing Mill — was established in 1886 by F. T. Buell, a Canadian who came to Dallas as a teenager in 1877. The factory (seen above in an ad from 1901) was built in 1890 just west of the H&TC Railway tracks, at the southwest corner of Hawkins and Montezuma (a street which no longer exists but which ran between Bryan and Live Oak). The mill can also be seen in this ad from 1896: 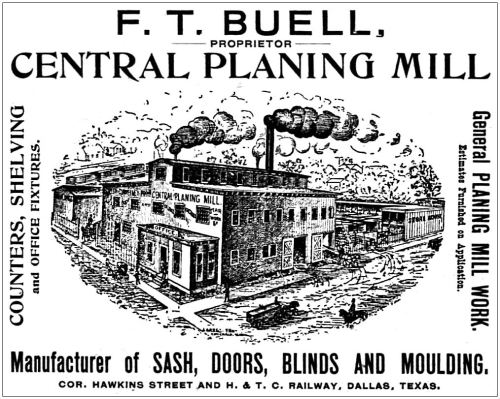 The wood frame building burned down in a massive fire in November, 1910, and a larger (concrete) factory was built on the same site (an approximate view of the mill’s location as seen today — just to the east of and slightly behind Crozier Tech — can be seen here). The company later became the Buell Lumber & Manufacturing Company in 1918, moved a few times (it left its Hawkins and Montezuma location for Hawkins and Swiss in the late 1940s), eventually became Buell & Co., and was still in business at least into the 1980s.

To get an idea of what the surrounding neighborhood looked around the time that photo was taken, see the 1899 Sanborn map here; the 1921 Sanborn map shows the larger post-fire operation, here. Note the neighboring “Central High School”/Bryan Street High School (known more familiarly as Crozier Tech High School); over the years, thousands of high school students walked past (or might even have lived across from) this mill and lumber yard.

Read about the massive fire of Nov. 30, 1910 that destroyed many of the businesses and houses that surrounded the Buell mill in the Dallas Morning News account “East Dallas Fire Damage $75,000; Near Conflagration at Live Oak and Central Destroys Parts of Four Blocks” (DMN, Dec. 1, 1910) here. The Buell mill was deemed a “total loss” with damages amounting to more than $20,000 (equivalent to over half a million dollars in today’s money). Ads from several of the businesses affected were placed on the page this story appeared on. Below, the Buell ad.