Dallas Football Through the Decades

1905: Early days of local football. In 1905 there were hopes of getting up a “heavyweight team.” Prospects were iffy. (All images are larger when clicked.)

This was at a time when football injuries — and DEATH — were not uncommon.

1911: The Dallas High School team at Gaston Park (a popular sporting field which is now the site of the Dallas Music Hall at Fair Park). This photo was taken on December 16, 1911 — that day they defeated Fort Worth High, 15-5.

1918: The Love Field eleven was made up of military personnel based at the airfield during World War I. They played other military teams in the area, venturing as far as at least Waco. 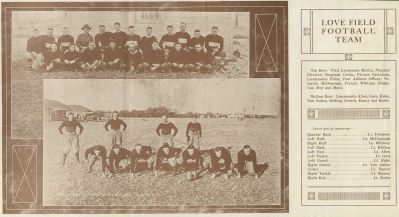 From “Dallas As a City In Which To Live” booklet, SMU

1920s: The SMU Mustangs took on the University of Missouri Tigers at Ownby Stadium. 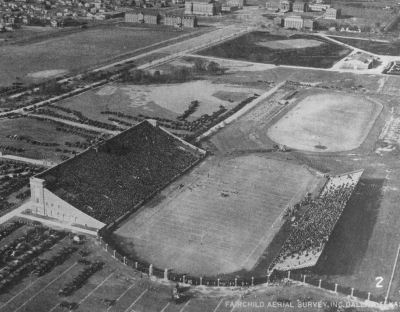 From “Dallas As a City In Which To Live” booklet, SMU

1932: Speaking of the SMU Mustangs, then-local sports superstar (and Olympics medalist) Babe Didrikson — who was proficient in every single sport she tried — was given the opportunity by SMU coach Ray Morrison to give football the old college try: he coached her in passing and receiving and even allowed her to suit up in an official uniform. She tried out her football moves for the pubic during a scrimmage in Ownby Stadium on September 18, 1932.

One of the most interesting features of the program from a football fan’s standpoint was demonstration of several of the Ponies’ famous scoring plays, in fast and slow motion. Babe Didrikson, Dallas’ famous feminine athlete, took part in the slow motion exercises and proved herself somewhat of a polished gridder — adding more fame to her long list of athletic achievements. (DMN, Sept. 18, 1932)

1933: The stadium which would eventually be named the Cotton Bowl looks a little otherworldly in this Lloyd M. Long aerial photo. 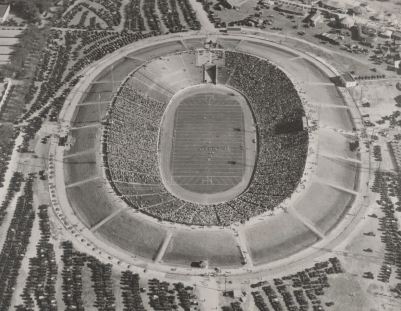 In December, 1949, Dal-Hi served as the practice field for the University of North Carolina team while in Dallas for the January 2, 1950 Cotton Bowl match against Rice University (which Rice won, 27-13). I like this snapshot — downtown looms like a ghost in the background.

via “Dismal Day in Dallas”

1950s: Dallas had a pro team before the Cowboys — the Dallas Texans. Here’s their ticket office, at 1721 McKinney Avenue. (From the article “Gone and Forgotten, The Dallas Texans of 1952” by Thomas H. Smith, from the Spring, 2005 issue of Legacies.)

1950s/1960s: Dallas high school football coaches who were all connected at one point (either as players or coaches) with Booker T. Washington High School: the legendary Raymond Hollie (head coach at both Booker T. and Roosevelt), Marion “Jap” Jones, and Sam Briscoe.

1981: In the tradition of other comic-book heroes appearing in Dallas to save whatever needed saving (here and here), Spider-Man and the Hulk stopped by to help with some football-related issue. The Dallas Cowboys Cheerleaders appear to have been involved.

7 Comments to “Dallas Football Through the Decades”

Leave a Reply to Not Bob Cancel reply