I’m pretty sure I was in the old Stoneleigh Pharmacy before it became the Stoneleigh P, but if so, I have no memory of it other than sitting at the fountain. I might have had a grilled cheese sandwich and a milkshake. I’ve definitely been in the “P” post-1980 — in fact, my father’s bookstore used to be across the street from it, and it was definitely a mainstay for great hamburgers.

Despite the location being so familiar, I didn’t know about the history of the old Stoneleigh Pharmacy, so when I came across the (slightly blurry) photo above and the one immediately below, I thought I should look into what was happening at 2926 Maple Avenue before the arrival of the Stoneleigh P. 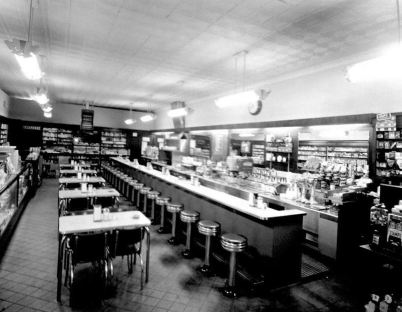 The Stoneleigh Pharmacy was the anchor of a small strip of shops which were built in 1923 at Maple and Wolf, directly across from the brand-new Stoneleigh Court, which, though now a hotel, began life as a very fashionable apartment-hotel (an apartment house with hotel amenities). There were concerns about a shopping strip in what was then a residential area, and the city tried to stop the construction. (Most images are larger when clicked.)

But the city lost and the building was completed.

I looked everywhere to find a period photo, and this is the best I could do — it appeared in a special section of The Dallas Morning News which coincided with the opening week of the Stoneleigh Court. 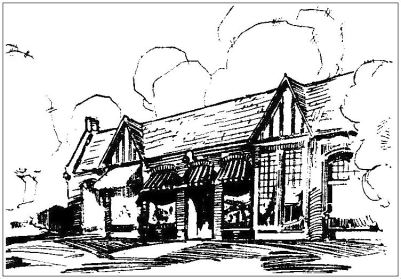 The interior of what was originally called the Stoneleigh Drug Store, at 2926 Maple Avenue:

And a description of what sounds like a showplace of a drugstore, including Circassian-walnut fixtures inlaid with ebony: 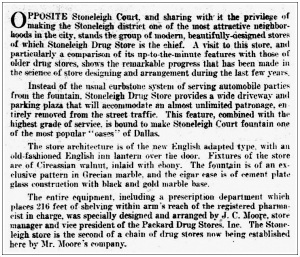 The drug store was owned by a company presided over by Royal A. Ferris, Jr., whose banker father had, until 1913, owned what many considered to be the most beautiful house in Dallas — Ivy Hall (which was situated at Maple and Wolf, diagonally across from the pharmacy, and which would become the site of the Maple Terrace Apartments in 1924).

The drug store changed hands several times, until 1931 when pharmacist Henry C. Burroughs acquired it — and he was there for the long-haul, owning it until 1970. (H. C. Burroughs is also notable for having served on the very first Dallas City Council, having been elected in 1931 when the city of Dallas adopted the city council-city manager form of government.)

In 1973, the pharmacy stopped being a pharmacy when it was purchased by a group of investors including Tom Garrison, who renovated the old drugstore into a neighborhood bar/pub, while still retaining a drugstore “theme” and naming the new endeavor the Stoneleigh P. It was an immediate hit with the intellectual/artistic crowd, attracting denizens of the (then-funky) McKinney Avenue and Oak Lawn neighborhoods, Stoneleigh Hotel guests, Maple Terrace residents, and staffers from nearby KERA. 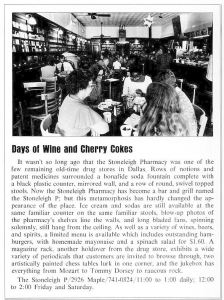 It was “happening” but not obnoxious — although the Lou Lattimore ad below — featuring a “glitter jeans” “knockoutfit” (yes, “knockoutfit”) which “can make you outsparkle the gang at the Stoneleigh P” — might have one thinking otherwise. (It was the ’70s, man.)

Everything seemed to be going along swimmingly when, in the early hours of January 26, 1980 a huge fire engulfed the group of buildings on the southeast corner of Maple and Wolf — according to newspaper reports, at least 15 “major pieces of equipment” and 75 firefighters responded to the multi-alarm fire. The 57-year-old building burned to the ground. Watch the WBAP-Ch. 5 News report here (with additional footage here).

A few screenshots from the above-linked news report: 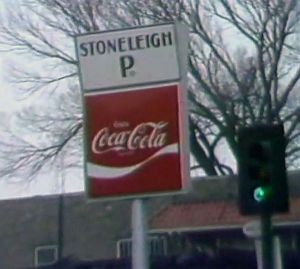 Garrison rebuilt, and the new Stoneleigh P opened in the summer of 1981. It still stands and is something of a Dallas institution. It’s now an unbelievable 46 years old. Here’s how it celebrated its 18th anniversary:

I’m certainly glad it’s still around. I’ve got some great memories of the Stoneleigh P (except, maybe, for that one New Year’s Eve in the ’80s…).

Top two photos found on eBay. They appear to have been taken by the Liquid Carbonic Corporation, manufacturers of soda fountains — read all about the company here.

Stoneleigh Pharmacy label (with red letters) is from Jim Wheat’s Dallas County Texas Archives site. (J. T. Covington was associated with the pharmacy from about 1925 to 1927.)

Videotape screenshots are from the WBAP-Ch. 5 News report on the 1980 fire; footage is from the KXAS-NBC 5 News Collection, UNT Libraries Special Collections, Portal to Texas History.

Photo showing the interior of the Stoneleigh P was taken in 2015 by Paula Bosse.