Welcome to my casket!

In May, 1946 a new Fair Park midway opened with new rides and new attractions to entice entertainment-seekers to Fair Park at a time of the year when the State Fair of Texas wasn’t in session. On opening day a beauty queen was chosen, a new 17-inch telescope was introduced, and a man was buried alive.

That man was C. S. “Scotty” Scott, seen above lounging in a comfy-looking casket in pajamas and robe, looking happy, propping up the lid. On May 11, 1946, Scotty Scott was buried six feet below the midway where he vowed to remain until the last day of the fair — Oct. 20th. That’s five and a half months. 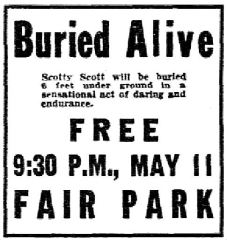 Countless ads appeared over the weeks offering $500 (the equivalent of about $6,500 in today’s money) to anyone who might stop by his Fair Park lair and find him not there.

The exact set-up is not fully clear, but, basically, he was buried in a coffin in a very small space, with a ventilation pipe. One report said that visitors were able to see him through a glass partition — another said that people were peeking at him and talking to him via an eight-inch vent pipe. However they were observing him, they weren’t doing it for free — if you wanted to get a look at Scotty doing whatever it was he was doing down there, you had to fork over 25 or 30 cents. All this being-watched and chit-chatting probably helped distract Scotty from the fact that he was buried alive! (I’m getting claustrophobic just typing this.)

If the thought of being buried alive gives you the willies, Scotty was not completely immune himself. One report mentioned this was probably the last time he would perform this stunt because he was reaching his “breaking point” and “He has to fight himself continuously to keep from being irritable and cross” (Dallas Morning News, Oct. 13, 1946). Luckily, claustrophobia did not seem to be too much of a problem for him as he had been doing this kind of endurance stunt for several years and kept coming back for more — he had, somehow, managed to remain buried in San Francisco for eight months!

Though he considered his main vocation to be a daredevil race driver, he had stumbled into this weird, but lucrative, line of work in 1935 when he had seen a similar stunt being performed in California, and a friend bet him $1,000 he couldn’t do it for 30 days. He won the bet. By the time of this 1946 Dallas stunt, he had been buried alive a LOT — he estimated that he had spent a total of more than four and a half years (!) buried alive.

According to Scotty, the worst part of the buried-alive-thing was the un-burying:

“From past experience the most painful part of the ordeal will come when they dig me up. My circulation will be so bad that my body will turn purple and I will be unable to sit or stand for any length of time. My whole body will feel like a leg or arm that has gone to sleep.” (DMN, Oct. 13, 1946)

Scotty Scott spent 162 days buried alive in Dallas — he even celebrated his 28th birthday underneath Fair Park. He was buried on May 11 and was disinterred on the final day of the fair, Oct. 20. Crowds gathered as men with jack-hammers cracked open the cement-covered tomb. As the coffin was lifted up a woman fainted. He was transported by ambulance to a hospital, and the next day he was interviewed on a national radio program.

Why on earth would anyone do this? More than 75,000 people had paid to take a look at Scotty Scott lying underground. The total amount of money people paid for this creepy privilege works out to almost $300,000 in today’s money. That’s why.

Try not to think about being buried alive. TRY!