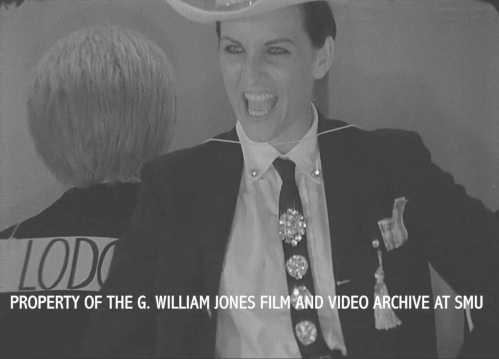 2019 is finally dragging to a close. This has been a difficult year for me and my family as we have struggled with health issues involving an older relative. There were weeks which passed during which I wrote nothing here, which is unfortunate, because immersing myself in this blog — in the researching and the writing — is not only fun and satisfying, it’s also a good distraction when stress is ratcheting up pretty high. But things might be settling down a bit, and I hope to return to more regular posting in 2020. But as far as 2019, here are my personal favorite Flashback Dallas posts of the past year. (Pictures are larger when clicked; read original posts by clicking titles.)

This is my favorite post of the year, partly because it has a personal connection to my family’s past, and partly because I had a role in identifying just what this 1964 film was and who some of the players were (including a politically active Dallas housewife who would go on to become governor of Texas). The film is an important find for reasons having to do with Texas history, Dallas history, Ann Richards history, Texas Democratic Party history, women’s history, and social and cultural history. And it’s just a fun snapshot of a very specific time in local politics. The screenshot above shows charismatic Betty McKool onstage as Nelson Rockefeller, a (very wealthy) Republican candidate for President in 1964. (Image source: G. William Jones Film and Video Archive, Hamon Library, SMU)

This post was the direct result of the “Political Paranoia” post — Betty McKool’s son saw it and sent me scans of many of the Christmas cards that his mother and her close friend Ann Richards created for years and which, even at the time, had attained a sort of legendary cult status. The ridiculous and irreverent cards were much anticipated every year. I never thought I’d ever be able to find more than a couple of them, but thanks to Mike McKool Jr., I’ve seen more than I ever expected to — and was able to share them! This post just made me happy. (Image source: Mike McKool Jr.) 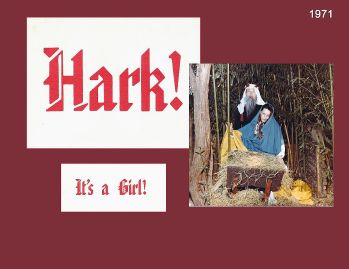 I found an odd postcard on eBay showing armed guards standing in front of huge piles of tires. What’s with all those tires? Why were they being guarded by men with guns? And most importantly, where in Dallas was that mountain of tires? I loved diving in and researching this. I don’t know how interesting it was for people to actually read (and it was pretty long), but this was definitely one of the most fun research tasks I assigned myself all year. (Image source: eBay)

This is another one of those posts where I just really wanted to know the story behind an unusual-looking postcard. I did a ton of research on this forgotten “big moment” in Dallas history, and I loved it. (Image source: eBay) 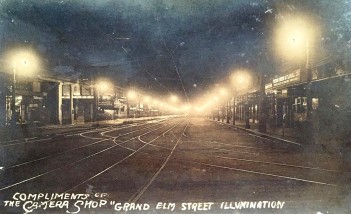 And yet another instance of seeing an image and wondering “What is this?” and then plunging in to try to find out answers to all the questions I had. And, again, I loved it — I loved reading about this guy and his indisputably weird vocation. I posted this on Halloween because it’s kind of creepy, and I think I’m safe in saying that this post got fewer hits than any other thing I wrote all year! Hardly anyone clicked over to read it — I’m going to blame it on readers’ phobias and not my sparkling way with words! (Image source: George W. Cook Dallas/Texas Image Collection, DeGolyer Library, SMU) 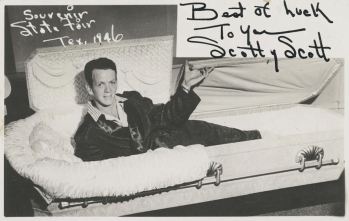 A look at an old Dallas favorite which has had two separate identities. The Stoneleigh Pharmacy opened in 1923 as a sort of companion to the Stoneleigh Court hotel across the street and had a good long run, until 1980 when, sadly, it burned down — burned ALL THE WAY DOWN TO THE GROUND. But in 1981, the Stoneleigh P rose from the ashes and, thankfully, is still going strong. Long live the Stoneleigh P! (Image source: The Dallas Morning News, Oct. 14, 1923) 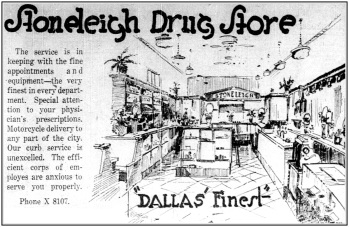 Other than a few Fortnight celebrations, I didn’t grow up popping into Neiman’s, so I knew not of the Zodiac Room, other than it was a place where elegant women went to have elegant foodstuffs like tea and cucumber sandwiches, and that Helen Corbitt (whom I knew only from seeing her name on a couple of my mother’s cookbooks) was somehow affiliated with it. I wrote about it mainly because I came across scans of the children’s menu on Instagram. As I wrote in the post, “My whimsy-threshold is pretty low, but I love the utterly charming drawings which grace the front and back covers…” — and that was more than enough reason to write about the famed Zodiac Room. (Image source: @reflectionofaman Instagram feed; artwork by Alma Shon) 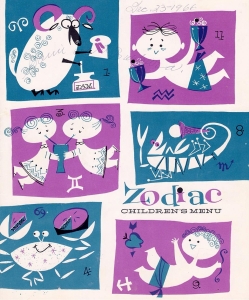 This is such a great photo — and this Old East Dallas block is still recognizable today, if not quite as interesting-looking. At one time this block contained several bars with Space-Age names: the Star Lounge, the Orbit Lounge, the Rocket Lounge, the Space Lounge, and the Apollo Lounge. That would have been the place to head to for some great (and probably delightfully seedy) bar-hopping! As I wistfully say to myself all the time while writing about Dallas’ bygone days, “Born too late, man — born too late.” (Image source: City of Dallas Historic Preservation Program archives) 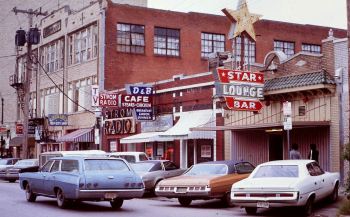 This is the fourth post I’ve written about Mike Owen. I’m not quite sure how that happened, but I now feel that, surely, I must be a Michael G. Owen Jr. expert! A large heretofore unknown painting by Owen — who is known mostly for his work as a sculptor — was to go up for auction, and that was the impetus for my writing this post about the little-known artist. (The painting sold for an amazing $228,000.) (Image source: David Dike Fine Art) 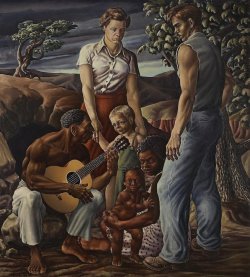 This post is made up almost entirely of lovely hand-colored postcards. It’s a shame places like this aren’t around anymore. (Image source: George W. Cook Collection, DeGolyer Library, SMU) 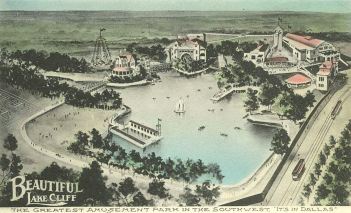 A high point of 2019 for me was the totally unexpected announcement that I had been chosen to receive the 2019 Education Award from Preservation Dallas for my work on Flashback Dallas. It was very flattering to be acknowledged for the work I’ve done, but I hesitated about going to the awards ceremony because I’m a major introvert, and the prospect of being given an award — in public! — even if it was only one in a night filled with many awards — would cause some definite amount of anxiety and/or embarrassment. But I talked myself into it and went, and I’m so glad I did. First off, the event was held in the beautiful Lone Star Gas Building, which was fantastic (those elevators!). But more than that, going to the event gave me an opportunity to meet people who actually read the blog and who came up to me to tell me they were fans! You don’t get that very often when you do all your work alone at home. Social contact isn’t so bad after all! It was a wonderful night, and memories of it have helped keep my head above water as I’ve slogged through this difficult year. The very nice article about me by Deb Brimer, which she wrote for Candy’s Dirt, was also a wonderful boost. So, thank you, Deb, and thank you, Preservation Dallas! I’ve just uploaded a short video of the remarks about my award (me, me, me!) presented that night by David Preziosi, executive director of Preservation Dallas, here. (Image source: me!) 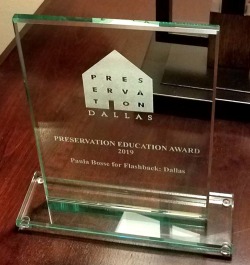 I enjoyed writing all the posts that appeared on the blog this year, but these had some little extra something for me. How many of my favorites were also the readers’ favorites? That list will be posted tomorrow.