I’m a sucker for old home movies, and these two circa-1940s films are pretty cool — the first one has shots taken around Love Field and the second one has views of Main Street and Elm Street, full of traffic, pedestrians, and streetcars. Best of all, both are in color!

The Love Field film shows several of the businesses operating in Love Field, including the Dallas Aviation School, seen above in a screenshot from the film. Also seen is the building below, which appears to have housed offices for Delta Air Lines, Braniff Airways, and American Airlines. I’ve never seen this odd-looking building.

Also seen are these two signs:

Below is the two-minute silent video:

The second video contains a lot of non-Dallas things (imagine!), but the first minute and a half were shot moving east down Main and Elm streets. (The Elm Street footage is, for some reason, really sped up — if you want to be able to focus on anything, I suggest fiddling with the YouTube settings and slowing the playback speed to .25.)

And here’s a view of Elm Street, also shot from just west of Akard:

And here’s a stretch of Elm you don’t see all that often in historical shots of downtown — Elm east of Harwood (the “camel” sign is for the Campbell House hotel on the southeast corner of Elm and Harwood): 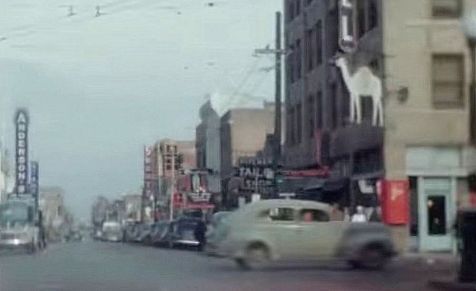 The video is here, with the first minute and a half shot in Dallas (and, seriously, turn the playback speed down!):

Thanks to Dallas author Rusty Williams for pointing me to the Periscope website! Check out Rusty’s history books here.