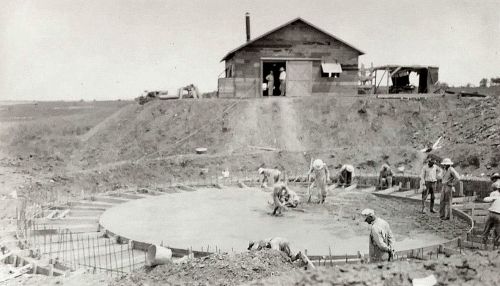 I came across this photo on eBay a year or more ago, but I’ve never been certain where it was taken. The photograph was processed and developed by Skillern’s in Dallas, but it’s always possible it wasn’t actually taken in Dallas. The back of the photo can be seen below, with the following penciled notation:

I can’t make out the writing above and to the right of “foundation.” 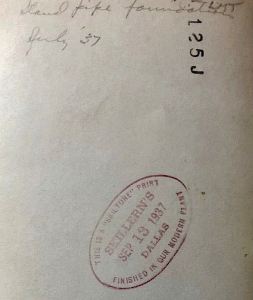 The only newspaper archive mention of construction of a stand pipe/standpipe in July, 1937 was one described as being in the “2400 block of Alamo, near Cedar Springs” (Dallas Morning News, July 13, 1937). That area has changed a LOT since 1937, with several streets changing names, changing course, being created, etc. — here’s a detail from a 1952 Mapsco to give you an idea of where it was:

So, north of downtown Dallas, near-ish to the present location of the American Airlines Center.

But the photo at the top looks like it would be well beyond the downtown area — the 1921 Sanborn map shows a lot of residences in the area (the 1937 city directory shows the 2400 block of Alamo was a mostly Mexican-American residential area with a few light industrial businesses) — the area to the west was less developed, with rail yards and railroad tracks and the Dallas Power & Light building. (The standpipe built in this block of Alamo might have been located in the middle of the block’s south side, where there was a gap in the numbering of occupied lots.)

There were probably other standpipes under construction in the city at the time, but the one on Alamo was the only one I saw mention of in the newspaper in the summer of 1937. Even if the site in the photo above is not this Alamo one, the story of that standpipe had an interesting story which took place in… July, 1937.

On July 12, 1937, Walter Gray, a laborer working on the standpipe, collapsed at the construction site. He was working inside the water tower, at the bottom, and had been overcome by gas fumes. A fellow worker, Bud Young, was at the top of the 80-foot tower and saw Gray collapse. Somehow he got the unconscious Gray up to the top of the standpipe, but he was unable to get him down. He shouted for help and two policemen rushed over. One of them, patrolman T. B. Griffin, fashioned a “bucket” out of a 50-gallon oil drum, climbed to the top of the tower, got Gray and himself in the bucket and had workers lower them precariously to the ground. A doctor administered oxygen at the scene and rushed Gray to Parkland. Walter Gray, whom the doctor described as having been near death, survived. And patrolman Griffin was nominated for a Carnegie Hero Award for his heroism and quick thinking.

I looked up T. B. Griffin (Tracey Boyd Griffin, 1908-1982) to see what else he had done, because that was quite a display of dedication to public service. A few months after this dangerous act, he lowered himself down an elevator shaft in which a man had stepped, not realizing there was no elevator — just open doors and no lightbulb (!). Also, in what seems like a hackneyed, unbelievable plot device that would happen in a Road Runner cartoon, Griffin and a partner snatched a burning fuse from a safe primed with nitro-glycerin just seconds before it was about to blow. Yep. A year after that, in 1939, he and his regular partner J. W. “Joe” Sides were moved to the vice squad as plain-clothes detectives where they busted innumerable gambling rings and bookie parlors (which, lordy, Dallas was overrun with like you wouldn’t believe). I bet ol’ T. B. had some stories to tell.

But back to the standpipe… still not sure where it was. Any ideas?

Never heard of a “standpipe”? See photos in the Flashback Dallas post “The Twin Standpipes of Lakewood Heights: 1923-1925.”