The earliest days of the DTS Hop-a-Bus saw a fleet of five, 19-passenger (non-whimsical) mini-buses which shuttled people back and forth across downtown. You could “hop on” and “hop off” for short trips, for a nominal fare (a dime), traveling along Main Street between Houston and Pearl, Monday-Friday, during working hours.

The service was very popular and quickly outgrew the mini-buses — in March, 1976 they went full-size, but ridership of these two large buses was disappointly slow to grow, mainly because people couldn’t tell the difference between the Hop-a-Bus and every other downtown bus. So, in October, 1978, someone, in his or her infinite wisdom, decided to paint the two special buses pink and add a bunny face and aluminum bunny ears (I seem to remember a tail, but I think I’ve added that in my own imagination). Voilà! Instantly recognizable!

At first, a lot of people hated them (describing them as “grotesque”), but pretty soon, downtown denizens fell for their charming appeal, and ridership increased substantially (seriously, you could see those things coming from blocks away!). Tourists loved them: they provided great photo opportunities, and they made getting around an unfamiliar city very easy — when lost, just jump on a pink bus and you’ll probably get to where you need to go.

Photos of the two pink “bunny buses” appeared in newspapers around the country. They even moonlighted at nights and on the weekends when DTS rented them out during off-duty hours — most notably to the pink-loving Mary Kay corporation and to the bunny-loving Dallas Playboy Club (which used the buses to ferry patrons from the Central Expressway club to Dallas Cowboys games).

The iconic (yes, “iconic”!) buses amused and delighted Dallasites until November, 1986. The bunny-bus fleet had increased to five 1966 GMC buses (at one point there had been as many as seven), and even though the fare had increased to 25 cents, they were still very, very popular with the public. But the pink buses were discontinued at the end of 1986 and sold. And, let’s face it, the streets of downtown Dallas have never been quite the same. Imagine if they were still around (and they SHOULD be!) — Instagram would be overrun with millions of bunny bus photos.

Below are a few photos and a video of our decades-gone transit pal, the cute, friendly Bunny Bus. RIP. 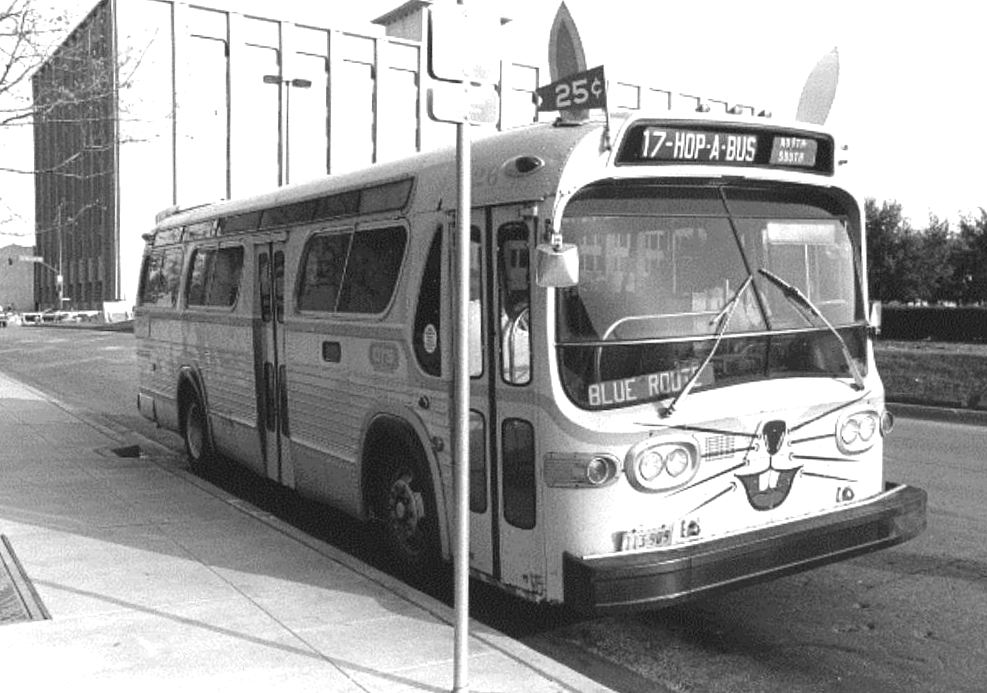 Here’s a great history of the Hop-a-Bus in an article widely syndicated around the country in 1979 — it was written by Claudia Goad, spokesperson for the DTS (click for larger image).

And, finally, a look at a 1976 Channel 8 story on the month-old Hop-a-Bus, before it was transformed into a bunny (from the WFAA News archives at SMU).

Top image is from the Dallas Transit System (DTS) 1985 calendar — the entire calendar can be found at the Portal to Texas History, here, from the DART Historical Archive.

There is a “Bring Back the Bunny” Facebook page, here.