‘Tis the Season For a Hot Dr Pepper 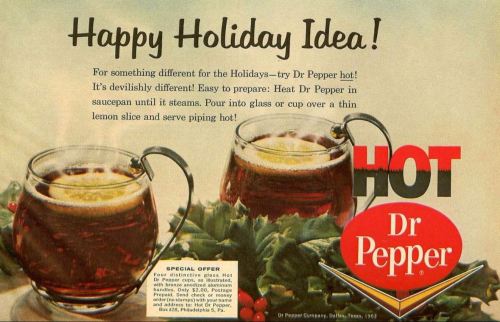 I don’t think I’ve ever had hot Dr Pepper. I remember seeing commercials for it on television as a kid, but I don’t think I’ve ever been in a social setting where it was offered. It always sounded like an odd thing to do with a soft drink. Years ago I was on a tour of the bottling plant in Dublin (…need I say “Dublin, Texas“?), and the guide said that this winter drink (which is always served with a slice of lemon) isn’t the same these days unless you drink Dr Pepper sweetened with real sugar — heated-up corn syrup apparently ruins the flavor.

Here are a few nostalgic advertisements to prove to the whippersnappers that this used to be a thing. The first two ads I could find mentioning this seasonal delicacy (the brainchild of a marketing wiz who might well have worked here in Dallas, home of DP’s HQ) are these two, from January and February, 1959 (click to see larger images):

The “new idea” was definitely being marketed nationally by at least 1963. I don’t know how popular it was, but they even manufactured special cups to drink it from. And, “for those who want something special, try the Boomer” — hot Dr Pepper with a dash of rum. 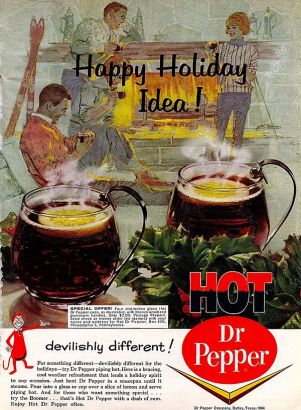 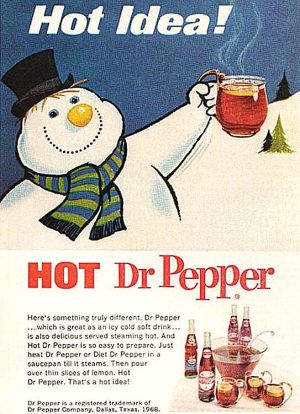 There are a few vintage commercial online. Here is one starring Dick Clark, featuring the snowman above.

(Am I the only one disturbed by seeing a pot of boiling Dr Pepper?)

There are a couple of others, in lesser image quality: watch them on YouTube here and here.

There you have it. Consider leaving a Boomer out for Santa. It’s chilly out there. Cheers!

The rest are from various places, but many were found here.

10 Comments to “‘Tis the Season For a Hot Dr Pepper”