Garrett Park (at Munger and Bryan) was established in 1915. The postcard above shows it filled with leafy trees and bursting with brightly colored flowers. There is playground equipment at the left and, in the background, St. Mary’s College. The park is still there — just south of Ross Ave., past the lowest bit of Lowest Greenville — but the George Kessler-designed charm is almost entirely gone. The trees are sparser, and those flower beds? Below, a modern-day aerial view (click pictures to see larger images). Oh, how the mighty have fallen. 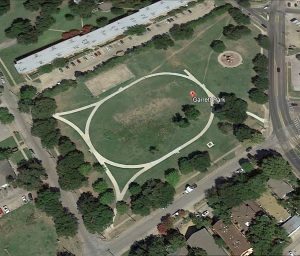 But back to more luxuriantly landscaped times. Before it became a city park, the land was once part of the sprawling campus of St. Mary’s College, a prestigious boarding school that prepared girls for college, run by the Episcopal Church since the 1880s. The school was on the far, far, FAR eastern edge of Dallas, and in the early days, the isolated area was so dominated by the school that it was referred to by everyone as “College Hill.” Below, a photo of St. Mary’s taken around 1908 — the land which later became Garrett Park was behind the school. (Note the tower of the school below which is seen in the postcard above. Also, note the tower of the next-door St. Matthew’s Cathedral — it is still standing at the corner of Ross and Henderson.) 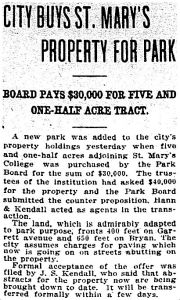 The park was officially named in honor of Bishop Alexander C. Garrett in February of 1915.

And descriptions of the new park from a 1914-1915 Park Board publication: 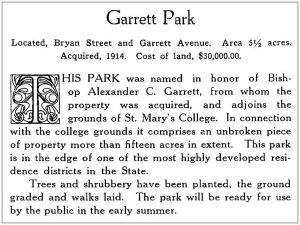 Top postcard is from the wilds of the internet.

Source of circa-1908 photo of St. Mary’s College is unknown.

Text and “before” photo of Garrett Park is from the Report for the Year 1914-15 of the Park Board of the City of Dallas; a scanned copy is available at the Portal to Texas History, here.

Map of Kessler’s plan of the park is from Jay Firsching’s article in the Spring, 2003 issue of Legacies; the Garrett Park passage begins on p. 12, here.

To get an idea of the size of the St. Mary campus and Garrett Park in 1922, the Sanborn map from that year is here.

See the location of Garrett Park on a current Google map, here.

(This post was updated with additional text and new images on March 23, 2018.)