Above, a photograph of Passover seder, probably in the 1920s, taken at the South Dallas home of Sam and Dubbie Margules, with some (or all) of their nine children.

Sam Margules immigrated to the United States from Russia in the late 1880s. By the early 1890s he had made his way to Dallas and had begun working in the wholesale produce business. Once settled and on secure financial footing, he sent for his wife and four children (five more would be born in Dallas). In 1915, Sam established his own business, the Independent Fruit Co.

Even thought the Margules family seems to have had a happy and successful life in Dallas, there was one incident that must have been very unsettling for them. In the waning days of World War I, a Chicago trade publication reported an instance of vandalism against the Independent Fruit Co., perpetrated by a thuggish Liberty war bond committee. In what was clearly meant as intimidation, the shakedown “committee” had splashed yellow paint across the Margules storefront in the dead of night, as punishment for what they believed was the family’s refusal to purchase Liberty bonds. These attacks with yellow paint were a common occurrence around the country in those days (as was tarring and feathering!), and they were frequently directed at immigrants, as were nasty accusations that they were “slackers”  (a much-used pejorative at the time meaning “unpatriotic shirker” or even “coward”)

The family seems to have shrugged off the incident, but it must have been a frightening time for them. The Jewish community in Dallas was a large and thriving one, but there was always antisemitism to deal with, and the Ku Klux Klan’s rise to power in the 1920s was particularly difficult for Jews in Dallas. (Click article below to see larger image.) 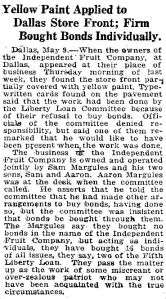 Photo from the Dallas Jewish Historical Society — the full citation is here.

Ads from The Dallas Morning News.

Article on the yellow paint attack from The Chicago Packer, May 10, 1919.

A passage on other yellow paint attacks on America’s immigrants by Liberty Bond committees can be read here.

A lengthy article on “The Jews Who Built Dallas” by David Ritz  (D Magazine, Nov. 2008) can be read here.