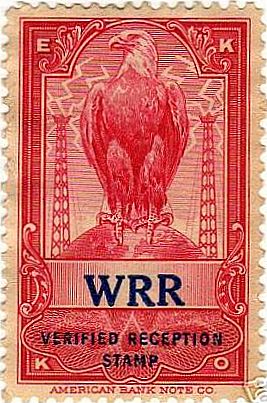 Chances are you’ve never heard of “Verified Reception Stamps” which were issued in the 1920s by a company in Chicago called EKKO. I certainly hadn’t. The stamps (referred to by collectors as “Cinderellas”) were enthusiastically and obsessively collected in the mid-’20s — people were really into it. Basically, it seems to have been a clever form of advertising which banked on both the public’s fascination with early radio and the then-very popular hobby of stamp collecting.

How did it work? Briefly (see below for links to much more involved articles about this), the EKKO company printed these stamps for subscriber radio stations around the country (and later for stations in Canada, Mexico, and Cuba). Once the radio stations received them, they issued them to listeners who wrote in to affirm that they had, in fact, picked up their station on the wireless. The listener had to prove it by stating the time he or she had tuned in and then give a short synopsis of the program they had heard. Oh, and they had to enclose a dime. (The dime was probably the most important part of this whole fad — at least for the broadcasters.) In return, the station would check their logs and “verify” that the dime-sender probably DID hear the station, and one of these little stamps would be sent out post haste. The EKKO company also conveniently printed up albums for collectors to paste the stamps into. I’m not sure how one was expected to fill up the book (with pages devoted to each state), since there’s no way you’d be able to pick up the signals of all those stations, but I guess that’s what gets collectors’ blood racing. It’s the thrill of the chase. The verified reception stamp-collecting fad died out as the Depression set in, and it became hard to justify spending one’s precious hard-earned dimes on a frivolous hobby.

Verified reception stamps were issued by the five main stations in the Dallas area in the 1920s. WRR, at the top, was the first radio station in Dallas and one of the earliest stations in the country. It began broadcasting as a sort of early police radio in 1920 and received its official broadcasting license in 1922. It remains an oddity in the radio world as it is a commercial radio station that is owned and operated by the City of Dallas. 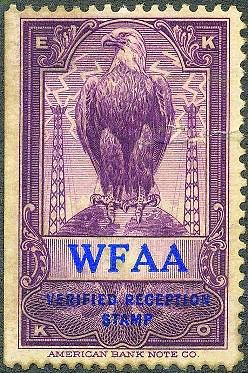 WFAA signed on in 1922 and was part of the nascent Dallas Morning News media empire.

WBAP, a Fort Worth station, also signed on in 1922. Someone thought it might be cute if “WBAP” stood for “We’ll Be At the Party.” More serious-minded station people went with “We Bring a Program” which, really, isn’t much better.

KFJZ (another Fort Worth station) came along in 1923. Its founder sold the station five years later for a good chunk of change and then went to work for WBAP.

KRLD began broadcasting in 1926 and was acquired by The Dallas Times Herald a year later.

A sample page the “Texas” portion of the official EKKO stamp album.

The EKKO company had some competition in the PM Bryant Co. Bryant stamps required no “verification” — you just sent them your dime and got a stamp. Their stamps had no eagle, but they DID have transmitter towers and the essential lightning bolts.

And now you know!

All of the above stamps come from a bewilderingly jam-packed page of thousands of these stamps. It’s pretty cool, but the page takes FOREVER to load. Find it here. (There is a page with with links only — no pictures. It loads a lot faster. Find it here.)

There are several articles about EKKO stamps out there — check out one here, and one here. One on Bryant stamps is here.

An incredibly comprehensive history of Dallas radio is the DFW Radio Archives site — its main page is here. The pages dealing with the stations broadcasting in DFW in the 1920s are here and here. I highly recommend reading the very interesting account about how WRR evolved from an experimental police communication transmission tool to a full-fledged entertainment station.