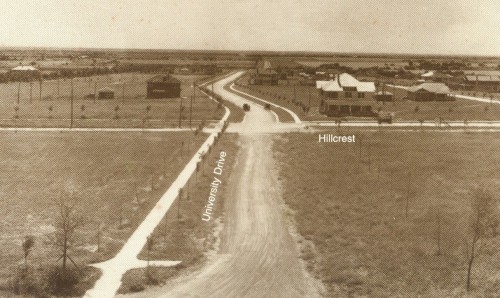 In the 1970s, Park Cities residents received oversized postcards in the mail featuring historic photos of the area. This “Heritage Series” was presented by the Park Cities Bank and later by Fidelity Bank. I’ll be sharing these wonderful images in the weeks to come. First up is this hard-to-fathom view of the intersection of University and Hillcrest, seen around 1915 when SMU opened, taken from Dallas Hall on the university campus. The description:

“In 1915, University Park was a sparsely populated community north of Dallas. At the time, most Dallas residents thought of Highland Park as ‘country living.’ This photo was taken from SMU’s Dallas Hall looking west along University Boulevard with the cross street being Hillcrest. The two-story home seen on the northwest corner of University and Hillcrest has long been replaced with a series of commercial buildings.”

UPDATE: For a much, much larger image of this photo, click here.

There is a book all about the houses that were built in that first block of University: The Block Book by Bonnie Wheeler (a review of which can be read here). (You probably won’t be able to find a copy of it, but if you do, snap it up. I see only one copy for sale online, and it is rather outrageously priced at just under $500!)