Antal Dorati, The Conductor Who Revived the Dallas Symphony Orchestra — 1945-1949

The news this week that the Dallas Symphony Orchestra’s musical director, Jaap van Zweden, was leaving town to pursue a glitzier gig was seen as an inevitable move to many of his disappointed fans. The DSO has been something of a springboard for conductors working their way up the conductor career ladder. Another celebrated conductor who spent a few years in Big D before rising to the heights of international acclaim was Hungarian-born Antal Dorati (1906-1988).

Dallas had classical music concerts in the 19th century, but the roots of what we now know as the Dallas Symphony Orchestra reach back to about 1900, under the direction of Hans Kreissig, who had settled in Dallas in 1887.

For various reasons (lack of community interest, lack of financial support, etc.), some of these early seasons were truncated or suspended — there was a gap of several years after Kreissig’s tenure, for instance, and there were no performances during most of 1936 and 1937 because of activities surrounding the Texas Centennial and renovations to the Music Hall (the DSO performed at the Music Hall in Fair Park). The most noteworthy suspension of performances was during World War II when the symphony was “temporarily dissolved”: not only was the financial state of the organization not good at this time, but the war itself had depleted the ranks of the performers — the DSO shut down completely in 1942 because conductor Jacques Singer and several of his musicians had enlisted or were drafted. John Rosenfield, the arts editor of The Dallas Morning News and an ardent classical music lover, wrote often during this time how the loss of the DSO was a crushing cultural blow to the city.

When the war ended, Dallas’ music-lovers (and musicians) clamored for the return of the DSO. A search began for a conductor who was not only a superior musical director but who would also be able to build an orchestra from scratch; they found that man in 39-year-old Antal Dorati, a former student of Zoltan Kodaly and Bela Bartok who had made a name for himself as a musical director for ballet companies such as the Ballet Russe de Monte Carlo and the Ballet Theater — his DSO appointment was announced in the fall of 1945.

Somehow, in only two months, Dorati managed to put an orchestra together, prepare the season’s schedule, rehearse the musicians, and present the first performance of the “reborn” Dallas Symphony Orchestra on December 9, 1945. 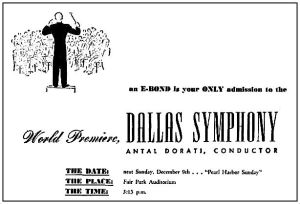 The response to that first concert was rapturous:

The crowd was somewhat stunned by the excellence of the ensemble that will bear Dallas’ name. To many, grown realistic or cynical in the years’ cultural struggles, the new orchestra was an unbelievably precious gift. Nothing so fine was expected by even the optimists. And it belonged to them with the promise that it would stay for all the time they could foresee. (John Rosenfield review, “Capacity Audience Thrills To Reborn Dallas Symphony, DMN, Dec. 10, 1945)

During the intermission of this debut performance, Dorati was interviewed on the radio and had nice things to say about Dallas:

I fell in love with Dallas not last September when I was engaged but as far back as 1937. When I visited here year after year with the Ballet Theater. I said to myself that if I ever withdrew from the ballet and became a resident conductor for an American symphony, I would like it to be the Dallas Symphony Orchestra.” (DMN, Dec. 10, 1945)

One little thing the Maestro was unable to accomplish, though, was to find a place for his family to live. The severe lack of postwar housing affected even the wealthy cultural elite!

And, with that, the DSO was back. It toured. A LOT. And made recordings. And appeared on national radio broadcasts. With Dorati at the helm, the Dallas Symphony Orchestra was making a name for itself and garnering a very positive national reputation.

A typical article about the young, photogenic Dorati went something like the one below, in which Dorati was described as “the wonderboy of Southwest symphonic circles.”

After a fairly short but incredibly productive time in Dallas, Antal Dorati accepted the position of conductor of the Minneapolis Symphony Orchestra in January, 1949. His successor, Walter Hendl (a startlingly “honest” obituary of the controversial Hendl appeared in the London Telegraph here), was appointed a few short weeks later, and Dorati’s final concert was April 3, 1949. 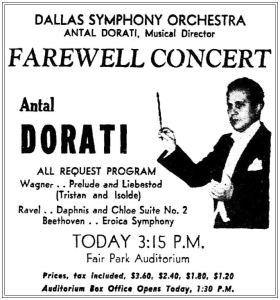 John Rosenfield’s melancholy review/farewell appeared the next day in The Dallas Morning News, and one imagines it tooks weeks for his tears to dry.

The spectacularly successful musical director and conductor, whose 4-season regime ended with an emotion-laden farewell concert, modestly disclaimed the founder’s role in Dallas Symphony history. The 1945-49 period was one of high-intentioned and nobly-adventurous endeavor….” (John Rosenfield, DMN, April 4, 1949)

And with that, the Maestro headed to Minneapolis, having built the post-war Dallas Symphony Orchestra into a nationally-respected organization. 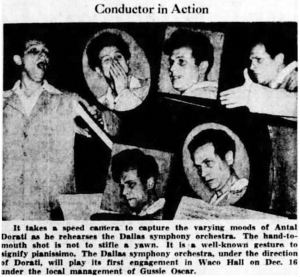 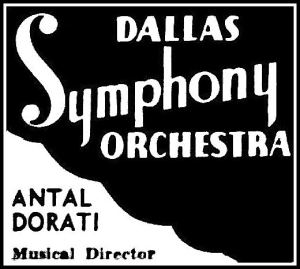 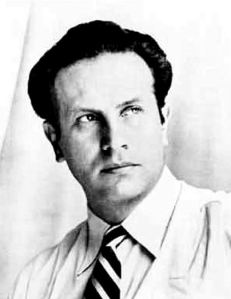 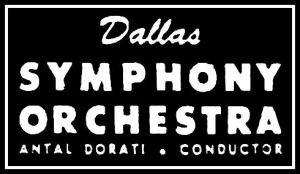 Top photo and article from the Aug. 17, 1946 issue of Texas Week, the short-lived magazine that was sort of a Texas version of Life, via the Portal to Texas History, here. Text may have been written by Paul Crume.

Listen to pianist William Kapell perform Prokofiev’s Piano Concerto No. 3 in C major, Op. 26 with the Dallas Symphony Orchestra under the direction of Antal Dorati (recorded at the Fair Park Auditorium the same week he made his “Adios, Dallas!” announcement in Jan., 1949), here.

More on Dorati and his close friend Yehudi Menuhin in my post “Yehudi Menuhin and Antal Dorati: A Collaborative Friendship,” here.

And, yes, the correct spelling should be “Antal Doráti.”

Most pictures are larger when clicked.

3 Comments to “Antal Dorati, The Conductor Who Revived the Dallas Symphony Orchestra — 1945-1949”