When Antal Dorati was appointed conductor of the Dallas Symphony Orchestra in 1945, Dallas suddenly began to see a lot of violinist Yehudi Menuhin.

In a 1954 article about Yehudi Menuhin’s close ties to Dallas, John Rosenfield — the influential arts editor of The Dallas Morning News — wrote that when Menuhin was in town for a performance for the Civic Music Association in 1945, he was “casually asked” (probably by Rosenfield himself) what he thought of Antal Dorati as a possible conductor for the then-long-dormant Dallas Symphony Orchestra.

A short while later, Dorati was hired as musical director of the “new” Dallas Symphony Orchestra, and, as a result, best friend Yehudi was in and out of town frequently during Dorati’s four seasons in Dallas. Not only did he perform frequently as a soloist with the DSO, but it was not unheard of for Yehudi to sometimes drop by and sit in with the orchestra during rehearsals. Menuhin often stayed with Dorati when touring the central United States or based himself at the Melrose Hotel, which he used as a sort of mid-continent pied-à-terre.

One of the great passions the two men shared was a love for the music of Hungarian composer Bela Bartok. Dorati, born in Budapest, studied piano under Bartok and was a champion of his work throughout his career. Menuhin had performed Bartok’s Violin Concerto to great acclaim, and near the end of Bartok’s life, after the two men had met and bonded, Menuhin commissioned him to compose a sonata for violin.

Dorati and Menuhin often collaborated on performances featuring Bartok’s works, and when it was known that Dorati was all-but-signed to be the new DSO conductor, there was much speculation that Bartok himself might come to Dallas, but Bartok’s death in September, 1945 put an end to those hopes.

Below, the first movement of the recording.

The recording was well-received. 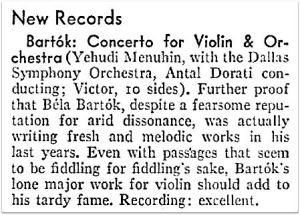 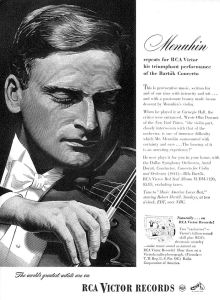 Of perhaps greater note, was the fact that Yehudi Menuhin conducted for the very first time in Dallas — the first orchestra he ever waved a baton at was the Dallas Symphony Orchestra, in 1946. No doubt because of their great friendship, Dorati coached the 30-year-old Menuhin on the finer points of conducting when the violin virtuoso expressed interest in learning what things were like on the other side of the podium. Menuhin first conducted the DSO on April 6 1946, for an invited audience.

He was ready to go “public” on January 16, 1947, conducting the DSO for one of its regularly scheduled national broadcasts originating from WFAA.

The text from the ad:

Yehudi Menuhin, one of the great violinists of modern concert history, makes his pubic debut as a symphony orchestra conductor, January 16. Antal Dorati, Conductor of the Dallas Symphony Orchestra, lends his baton to his protégé, Menuhin, for the entire one hour program.

Even though Menuhin insisted at the time that this brief foray into the world of conducting was fleeting and not a signal of any sort of career change, Yehudi Menuhin did go on later to direct many of the world’s great orchestras.

The friendship between Dorati and Menuhin lasted (from what I can tell) until Dorati’s death in 1988 (the decade-younger Menuhin died in 1999). They were personal friends and like-minded professional equals.

Between Menuhin and Antal Dorati, the Dallas Symphony Orchestra conductor, exists a friendship and a mutuality of musical aspiration that has resulted in outstanding musical collaborations. (John Rosenfield, DMN, Jan. 15, 1947)

Below, the only film I’ve been able to find of the two men together, filmed in 1947 during the time when Dorati was engaged in Dallas (although this was not DSO-related and was filmed in Los Angeles). The piece being performed is Brahms’ Hungarian Dance No. 4; Dorati accompanies Menuhin on piano (you finally see him near the end!).

Top photo of Menuhin and Dorati in preparation for Menuhin’s public debut as a conductor is from Texas Week magazine (Jan. 25, 1947), here.

The YouTube video of Brahms’ Hungarian Dance No. 4 was filmed at the Charlie Chaplin studios in Hollywood in the fall of 1947 (according to consumer reviews here).

More on Dorati can be found in my post “Antal Dorati, The Conductor Who Revived The Dallas Symphony Orchestra — 1945-1949,” here.

One Comment to “Yehudi Menuhin and Antal Dorati: A Collaborative Friendship”