A stool is waiting for you… (click for larger image)

The Moskovitz Cafe was located at 2216 Elm Street, between S. Pearl and what is now Cesar Chavez Blvd., in an area of predominantly Jewish businesses. The restaurant served “Kosher and American cooking” and was owned and run by Lui Moskovitz, a Romanian immigrant, and his Polish-born wife, Eva. Eva, recently widowed, had arrived in Dallas in about 1928 with her three children and seems to have married Lui that same year. They had run another restaurant before the Moskovitz Cafe: the New York Kosher Dining Room on Commerce had been located across from the Adolphus Hotel for several years before it moved to 2011 Main, around the corner from City Hall. After that closed, they ran the Moskovitz Cafe between about 1937 and about 1944.

In 1945 there was no Lui or Eva Moskovitz in the Dallas directory. There was, however, an Eva Haberman — it appears that the Moskovitzes had split, Lui had left town, and Lui’s ex-wife had taken back the name of her late first husband. At this time she must have been about 60 years old, but she worked for the next few years as a department store seamstress and lived with one or more of her three sons from her marriage to Nathan Haberman. She died in April, 1961. Not only is there no trace of Lui after his time in Dallas, there is also no trace of 2216 Elm. 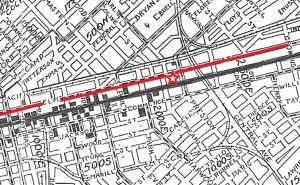 Photo appeared in the book Deep in the Heart: The Lives & Legends of Texas Jews, A Photographic History by Ruthe Winegarten and Cathy Schechter (Austin: Eakin Press, 1990); from the collection of the Dallas Jewish Historical Society.

I’m not sure who the people in the photo are. When the Moskovitz Cafe opened, Lui would have been in his mid-40s and Eva would have been in her early 50s. UPDATE: Per the comment below (from Eva’s grandson), the woman in the white apron is the proprietress, Eva Moskovitz, and the man at the cash register is her son, Jack Haberman.

More information about Mrs. Eva Haberman can be found in her obituary, published in The News on April 19, 1961.

2 Comments to “The Moskovitz Cafe”