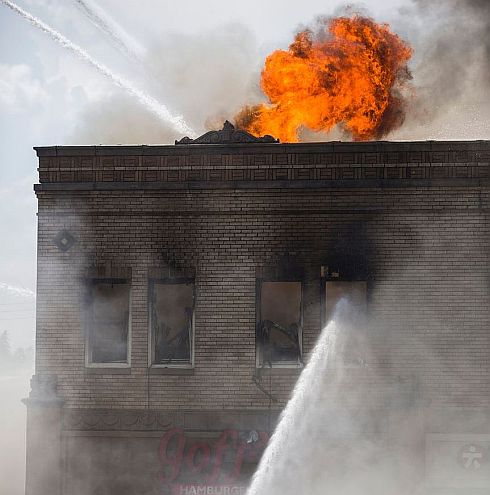 Yesterday, fire erupted in the old University Park building at the northwest corner of Hillcrest and McFarlin. The building — which housed Goff’s Hamburgers and several other businesses — is, today, a pile of rubble. I’ve always loved this building — every time I’d drive past it I’d smile, happy that the only truly distinctive non-SMU building along that part of Hillcrest was still standing. And now it isn’t.

The building — which was built in 1929 across Hillcrest from McFarlin Auditorium — had a rocky start. SMU really, really didn’t want it to be built.

A. B. Couch (1895-1970) came to Dallas around 1914 from Waco to attend pharmacy school. In 1921, a few years after becoming a pharmacist, he opened his own drugstore, the University Pharmacy, at the southwest corner of Hillcrest and Roberts avenues (Roberts was renamed McFarlin Boulevard in 1928). 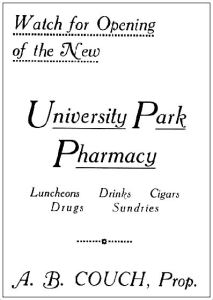 Business must have been good, because in February of 1923, Couch bought the vacant property across the street. Three years later, he applied for a permit to build a business on the property, and that’s when the Robitussin hit the fan.

It’s a bit confusing, but, basically SMU, the original owner of the property (and all that surrounded it), put their land west of the campus (west of Hillcrest) on the market, but it could be sold only with specific restrictions — there were several of these restrictions, but the two cited most frequently were that land in this University Park Addition was to be developed solely for residential purposes, and that these homes were to be occupied by white people only. Somehow, in transferring property and re-deeding and re-re-deeding — and all sorts of other real estate transactions I don’t understand — the contract for the large lot purchased by Mr. Couch was drawn up with the restrictions omitted (“an oversight”). Couch was insistent on building businesses on the land he’d purchased, and SMU was adamant that he not be allowed to. Cue the lawsuit. (An overview of this case — in the appeals court — can be read here. It’s interesting, if confusing.)

The court case dragged on and on, through injunctions and appeals, and, finally, in December of 1928, the Supreme Court of Texas ruled in favor of Couch. (Click to see a larger image.) 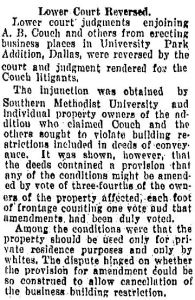 In the spring of 1929, Couch released the drawing of the two-story F. J. Woerner-designed building he planned to build:

He also announced that he would build in this same block, a $125,000, 1,000-seat cinema: the Mustang Theater, which, though not yet built, had been leased for 10 years to R. J. Stinnette, who ran the Capitol Theater downtown. The building was designed by W. Scott Dunne, the architect of many of Dallas’ movie theaters (the Texas Theatre, the Arcadia, the Melba, the Dal-Sec, etc.). 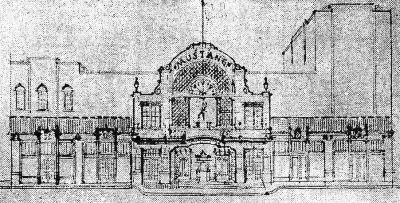 It doesn’t appear that the Mustang Theater was ever built, probably because the Varsity Theater in Snider Plaza (a stone’s throw away) had been announced that very same week (the Varsity opened in the fall of 1929).

So, forget the Mustang. Couch’s building — which was called, yes, “The Couch Building” — opened in 1930 or ’31. Its official address was 3402 McFarlin, but the address of the new location of the University Pharmacy was 6401 Hillcrest. There were a couple of stores next to the pharmacy, and offices upstairs (it seemed a popular location for doctors and real estate agents). Mr. Couch lived next door, at 3404 McFarlin (in a house which was, ironically, destroyed by fire in 1932).

That simple but lovely building stood on that corner for almost 90 years. Until yesterday. Sorry about that, A. B.

Below a photo taken on June 13, 1947, showing the “Highland Park/SMU” streetcar sitting at the end of the line, just south of Snider Plaza, with an 18-year-old Couch Building behind and to the left of the streetcar. 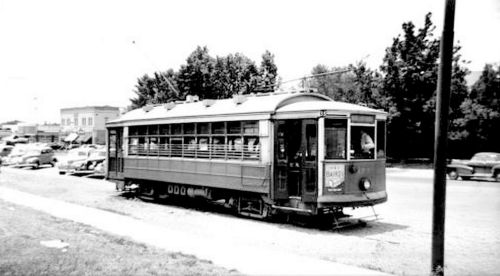 Below, the same view of Hillcrest looking south, from the 1965 SMU Rotunda yearbook. (Note that the University Pharmacy had moved back to the southwest corner of Hillcrest and McFarlin. Couch sold the drugstore business in 1943, and the new owner opened it across the street in a new building, back in its original 1921 location.) 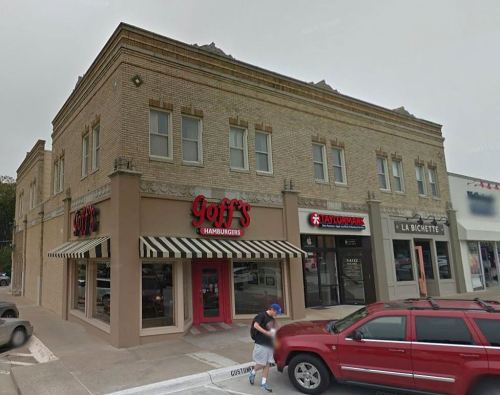 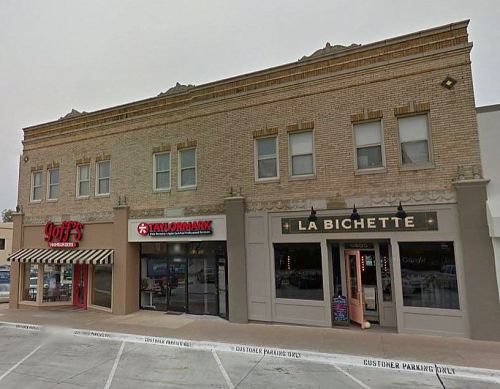 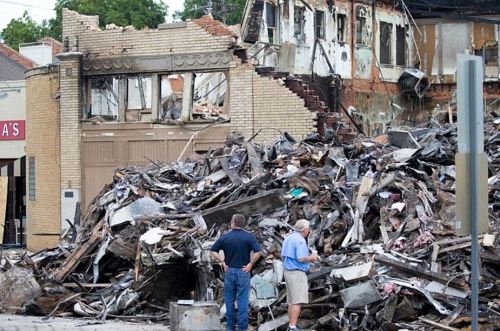 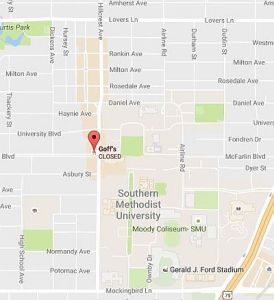 Top and bottom photos are from the Dallas Morning News; see their coverage here, here, and here. That top photo is VERY large on The News’ website — look at all the detail of the brick and decoration.

Footage of the fire and its aftermath, from WFAA, can be watched here (scroll down to see all video footage).

Photo with the streetcar is from eBay; I saw it in the Retro Dallas, Texas Facebook group, posted by Dallas historian Teresa Musgrove Gibson.

Take a look at the 1921 Sanborn map, here. This building would be built at what is the northwest corner of Roberts (later McFarlin) and Hillcrest. University Park is pretty wide open in 1921.