Too close for comfort…

Some people don’t realize that Pacific Avenue used to be lined with the railroad tracks of the Texas & Pacific Railway (hence the name “Pacific”). When trains weren’t barreling down Pacific regularly, the thoroughfare was used by non-locomotive traffic like pedestrians, bicycles, horses, and automobiles. When a huge cinder-spewing train screamed through, everything came to a resigned halt until it passed by. I can’t even imagine what that was like. I wonder how many times people, horses, vehicles, etc. didn’t manage to get out of the way in time?

When Union Station opened in 1916, trains that had previously run through the central business district now went around it (which probably cut the number of people rushed to the hospital with train-related injuries substantially).

The photo above shows Pacific looking east from N. Akard, as a blur of a train whooshes by. The Independent Auto Supply Co. (300 N. Akard) is at the left, and, at the right, the back side of Elm Street businesses, including Cullum & Boren and, to its left, the Jefferson Theater, with “Pantages” painted on the side. (The Jefferson was the Dallas home of the Pantages Vaudeville Circuit from 1917 until 1920, the year the Pantages people bugged out for the greener pastures of the Hippodrome, leaving the Jefferson to start a new relationship with the Loew’s circuit people. At the end of 1925, the Jefferson Theater was actually renamed the Pantages Theater. …Kind of confusing.)

Below, Elm Street in 1918 — what the other side of those buildings looked like. Cullum & Boren’s “CB” logo can be seen painted on the side of its building. (Click photo for much larger image.)

But back to Pacific in its scary, sooty, T&P-right-of-way days. This is what things looked like in 1909.

Fast-forward to 1920 — the trains had long stopped running, but the tracks remained, an eyesore and an impediment to traffic. (Cullum & Boren, again, at the right.) 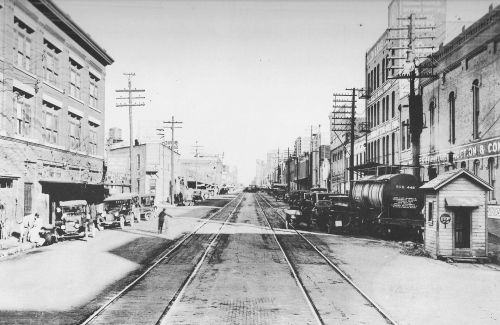 Thanks to the Kessler Plan, those unsightly tracks were finally removed from Pacific in 1923. Below, a photo from 1925. Big difference. Thanks, George Kessler!

More on the de-track-ified Pacific, here.