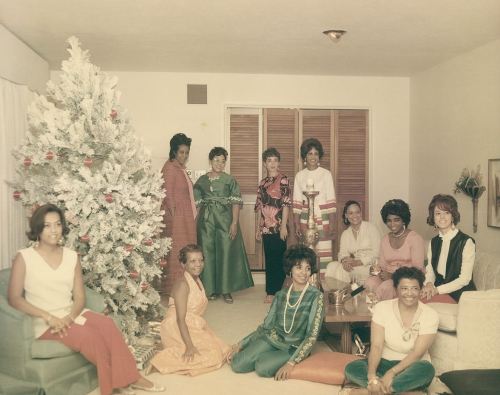 These women look like they’ve stepped out of a catalog — perfectly dressed, perfectly coiffed, perfectly posed. They are members of the Priscilla Art Club, the oldest African-American women’s club in Dallas. The club was formed in 1911, and I think it may still be active — the most recent news I could find of the club was from 2012, when the “centennial legacy quilt,” made by members to celebrate the club’s 100th anniversary, was displayed at the African American Museum. Below, a little history of the club from the press release announcing the exhibit in February, 2012.

In honor of Black History Month, the Priscilla Art Club, the oldest African American women’s organization in Dallas County, will host a display of its centennial legacy quilt made by its members […] at the African American Museum of Life and Culture, Dallas Fair Park.

“The idea of a custom designed legacy quilt started out as a novel idea from our Systems Committee in recognition of our 100th anniversary. The twenty-two club members quickly became engaged in seeing it to fruition and we are happy to honor the beauty, the inspiration and the legacy of our Club” said Shirley Porter Ware, Club President.

The Priscilla Art Club, organized in 1911 as a club for young matrons, was organized under the encouragement and direction of Mrs. Mattie Mansfield Chalmers. The organization’s purposes were to establish and maintain the aesthetic, promote congenial companionship and foster all social and community interests that pertain to the general uplift. The Club was named for Priscilla, a New Testament woman of extraordinary culture and the wife of Aquila, a Jewish tentmaker.

Since its auspicious beginning, the Club has invited into its membership many of Dallas’ most distinguished homemakers. These members have exhibited an interest or are talented in arts and crafts.

Besides being homemakers and mothers, the members have been and some still are principals, school administrators, teachers, business owners, social workers, church leaders and servant volunteers in the local community.

Throughout the century of service and sisterhood, recorded in The Priscilla’s prolific history include mention of service rendered in support of the World War I efforts by rolling bandages that were sent overseas to the field hospitals in France. For several years, the Priscillas decorated the shotgun house, located in Old City Park, in observance of the holiday season. In more recent years, the members have decorated t-shirts and jackets made from sweat shirts to give to men and women in local assisted living facilities. Club members have made crocheted skull caps in a variety of vivid colors and patterns and donated to cancer patients actively engaged in treatment regimens.

Regardless of change, the Priscilla Art Club’s concern for its artistic endeavors and for civic and social uplift will continue with deepening interest and commitment as the tradition of the founders’ legacy is carried forward.

I hope the club is still around. This year marks its 105th anniversary.

The 2012 press release was posted on the Facebook page of the Dallas Fort Worth Association of Black Journalists, here.

More on the history of the club can be found in the Dallas Morning News article “Reception to Honor Art Club’s 65th Year” by Julia Scott Reed (DMN, April 2, 1976).

The most in-depth history of the club that I could find online can be found in the guide to the Culmer Family Papers at UTA, here (scroll down to the paragraph that begins “The Priscilla Art Club was one of the most prestigious, if not elitist clubs for African American women in Dallas….”

Photo and newspaper article are larger when clicked.

6 Comments to “Merry Christmas from the Priscilla Art Club — 1968”