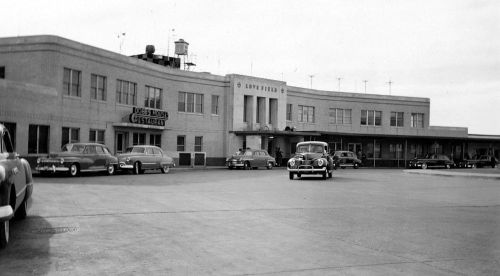 Dobbs House was a national restaurant and catering company, found chiefly in airports (although they did have non-airport restaurants, and at one point they had bought out the Toddle House chain). When the “new” Love Field terminal opened in 1940 (see the heart-stoppingly beautiful Art Deco front entrance at night, here), it had what was probably a very nice, perfectly serviceable, 24-hour restaurant. It was rather unimaginatively called “Airport Restaurant,” and it seated about 75 in the coffee shop and 100 in the dining room. And its “modern  blue and yellow leatherette furniture” was probably delightful.

A lot of people probably enjoyed a hot cup of coffee while seated on that modern leatherette. But in 1944, the Hull-Dobbs company waltzed in and took over the restaurant and catering business and agreed to pay the city what seems like a miniscule $500 a month (about $7,000 in today’s money). The administration building, which housed the restaurant, was undergoing remodeling at the time, and I guess the city was giving the company something of a break. In 1945, though, Hull-Dobbs began to pay 5% of their gross revenue to the city, rather than a flat monthly fee. (I’m guessing that 5% was quite a bit more than $500.)

Business was good. REAL good. It was almost too good, because almost every newspaper article which mentioned the restaurant (called Dobbs House, part of a national chain) noted how busy it was and how it was almost impossible for a person to find an empty seat. It was known for its good food (see a 1955 menu here), and one of the main reasons it was always crowded was because local people dined at the restaurant, taking up precious seats intended for hungry travelers. Dallasites loved to drive out to the airport for a nice meal, followed by a leisurely couple of hours watching airplanes take off and land.

But, basically, Love Field had become a major metropolitan airport, and its success — and the resulting increase in traffic and the overall crush of humanity — meant that everyone was running out of space.

The airport had outgrown its beautiful 1940 Art Deco terminal, and a new, equally heart-stoppingly beautiful terminal opened in 1958. Dobbs House moved into its more spacious quarters with a freshly signed ten-year contract. …And by now they were paying a whole lot more than $500 a month. According to a January, 1957 Dallas Morning News article, the restaurant offered a high bid of just over $15,000 a month to retain the restaurant concession at the airport.

The restaurant and catering business were not all that the Dobbs company was running. Not only did they have a “swanky” restaurant at the new terminal, they also had a non-swanky restaurant and a basement cafeteria. They also had, at various times, control of the following concessions: cigar, shoeshine, gift shop (including apparel, candy, and camera shops), and … parking (!). This was on top of their land-office business catering and restauranting. James Dobbs knew a thing or two about business — he didn’t get fantastically wealthy just selling 15-cent cups of coffee and black-bottom pie….

In 1958, Dobbs House opened the exotic Luau Room, which served Polynesia cuisine. This was another Dobbs eatery that was very popular with Dallasites, and it lasted many, many years.

The Luau Room was a sort of early “theme” chain from the Dobbs people, and it was a feature at several Dobbs House-served airports. The photo below might be the Dallas location. Might be Charlotte, or Orlando, or Houston.

via Tiki Central — check out the comments

Dobbs House  was a fixture of the Dallas airport/restaurant scene for a surprisingly long time. Dobbs House was still at Love Field in the 1980s — possibly into the ’90s. And when Dallas-Fort Worth International Airport opened, the Dobbs people slid right in. DFW was huge — and they had control of everything. (Alcohol sales alone must have been enormous!)

For D/FW’s first two decades, a single company operated all of the bars and restaurants that generate about $40 million in sales each year. Dobbs House had the food and beverage contract from 1974 until 1993, when Host Marriott Services took over the operations. (DMN, May 22, 1996)

Dobbs House was in business here for almost 50 years. That’s a pretty good run for a restaurant in Dallas. (And I hear their cornbread sticks were to die for.)

The Dobbs House cornsticks recipe is contained in the 1960 book How America Eats by Clementine Paddleford — used copies are out there, but they are surprisingly expensive. But from what I hear, if you want that recipe, it’s probably worth it!

An interesting side note about James K. Dobbs, head of the company that bore his name: even though he was a resident of Memphis, he actually died in a Dallas hospital in September, 1960, having been sent here for asthma treatment, and having recently suffered his second heart attack. He was 66. His company had grown to include about 125 restaurants at the time of his death. He had also made huge sums of money in automobile dealerships.