Big D from inside the ball… (click for larger image)

On Tuesday night I gave a little talk on the history of the La Reunion colony as part of the Dallas Historical Society’s Pour Yourself Into History series. The event was held in the *very nice* Five Sixty by Wolfgang Puck restaurant high atop Reunion Tower — right in the ball. I was a bit of a last-minute fill-in presenter, and I hesitated to accept the invitation because I always feel awkward talking in front of more than, say, two or three people, but I really, really wanted to go up to the top of Reunion Tower.

I hadn’t been to Reunion Tower since a family outing back around 1980 or so. Back then I was most fascinated by the fact that the restaurant slowly revolved to give diners a leisurely 360-degree view of the city (I always imagined it spinning out-of-control, pinning diners — and their meals — against the walls with centrifugal force, like a fine-dining version of the Spindletop ride at Six Flags, or The Rotor ride at the State Fair of Texas); but now, decades later, as an adult, the image of the spinning restaurant was eclipsed by the real star: the VIEW.

As you can imagine, the view is unbelievably spectacular — especially at night when Dallas is at its most glamorous. The ticket price is fairly steep to get up to the observation deck, and a meal and/or cocktails at the restaurant will set you back a goodly amount, but it is, without question, the most fabulous view of the city you’ll ever see. And you see all of it. When I started my talk about the history of the La Reunion colony of the 1850s (which was located about 5 miles due west of Reunion Tower, in West Dallas) the view was pretty much the one seen in the photo above; by the time I finished, we were, serendipitously, looking out over where the plucky colonists of “French Town” had toiled unsuccessfully 160 years ago. (Estimates on the boundary of La Reunion’s 2,000-acre land is the area now bounded by Westmoreland on the west, Hampton on the east, Davis on the south, and the Trinity River on the north — the southwest corner is marked here on Google Maps.)

It was a little noisy at the event Tuesday night, so if you were one of the very nice people who turned out, you might not have been able to hear anything I said! If you’d like to hear more about the history of La Reunion (and about Reunion Tower — and how, if a marketing agency had had its way, it might have been named “Esplanade” Tower), I enthusiastically recommend this very entertaining radio piece from Julia Barton (the La Reunion segment begins at about the 5:15 mark).

I took photos, but they don’t do justice to the view. The really breathtaking vistas are at night, and, sadly, none of those photos came out. Seriously, if you’ve never been up Reunion Tower — or if you haven’t been since it was opened in 1978 — you should definitely go now. Better still, go at sunset and enjoy the best view in Dallas as you sip delicious cocktails.

The view stretches for miles. Here’s a cropped view of Dealey Plaza (click to see it really big).

And, at sunset, the jail has never looked lovelier. 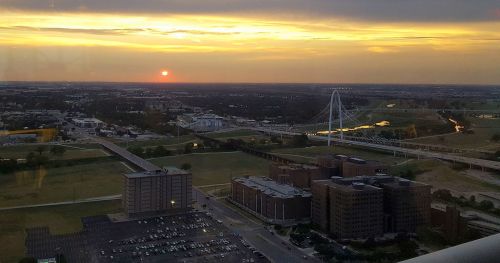 Back down on terra firma, looking up and saying “goodbye” to the ball. 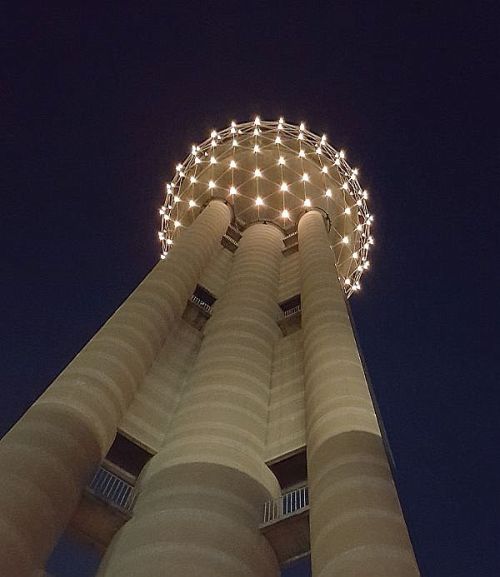 Thank you, Dallas Historical Society, for inviting me to be part of your event! And thanks to everyone who came out … and up!