When R. S. Munger moved to Dallas from Mexia around 1885, even he probably had no idea how revolutionary his patented inventions would become to the world of agriculture — he had several patents, but his “improved” cotton gin was hailed as the most significant advance in cotton ginning since Eli Whitney’s original invention. Munger had been producing his equipment for a while in Mexia, but he knew that in order for his company to grow, he would have to move to a larger city, one served by the all-important railroad. He arrived in 1885 and moved into an existing “East Dallas” building owned by the wealthy banker (and former cotton farmer…) William H. Gaston (who later became an officer of the company).

The following article appeared in an 1885 edition of the Dallas Herald. It is bulging with superlatives and grand statements which actually weren’t exaggerations: because of Munger’s relocation to Dallas and his products’ massive success, the city became a national hub of agricultural machinery manufacturing. This had a huge impact on Dallas’ economic development, and the unnamed writer of this article deserves credit for his prescient words. (Click to see larger image.)

Another article describes just what Munger’s “improvements” were and also has a description of his factory — the heart of which was a 25 horsepower engine (a quick Google search tells me that 25hp is the size of a standard outboard motor engine).

(You can read about Mr. Munger’s career accomplishments in A History of Greater Dallas, published in 1909, here, and in the Handbook of Texas entry here.)

Fast-forward to today: the factory which Munger began in Dallas in the 1880s is somehow still standing and is known by most as the Continental Gin Building.

Here are a few very early ads of Munger’s cotton-gin-manufacturing empire, from city directories (the illustrated ads are full-page, which even in 1886 cost a pretty penny). 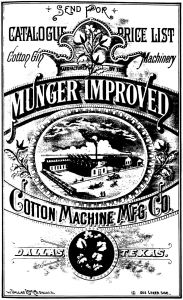 All other sources noted.

An aerial view of the complex of former Continental Gin Co. buildings can be seen via Google here.

More on the Continental Gin Company can be found in these Flashback Dallas posts: