This photo, taken around 1902, shows a northward-view of an intersection of the soon-to-be-annexed (or a just-annexed) Oak Cliff: Lancaster (the dark road running at a slight diagonal to the upper left of the photo), E. 10th St. (crossing Lancaster behind the “Eselco 10¢ Cigars” sign and running horizontally in the middle of the photo), and Jefferson, which contains the double tracks of the then-new Dallas-Fort Worth interurban railway.

The location of this photo can be seen on a 1905 Sanborn map here (in that map, 10th St. is at the right edge — to see the area just south of Jefferson — where the photographer snapped his photo — that map is here). The view today? Lancaster (which became N. Lancaster just north of E. 10th) no longer exists immediately north of 10th — that land is now occupied by Hector P. Garcia Middle School  — the location seen in the 116-year-old photo above can be viewed on Google Street View, here.

Let’s zoom in on this photo. Though grainy, it’s still really exciting to see views of Oak Cliff, just after the turn of the century (Oak Cliff was annexed by Dallas in 1903 but had been a thriving community for many years before that). Below, a couple of men are seated on a bench beneath a sign that says “Interurban Ticket Office,” a bicycle lies at the curb, men stand on the corner, and a horse-drawn buggy is parked underneath a sign that says “drugs.” Eselco brand cigars were ten cents apiece at the time (about $3.00 in today’s money). The “ticket office” sign helps date this photo, as the Dallas-Fort Worth interurban service (through Oak Cliff) began in July, 1902. 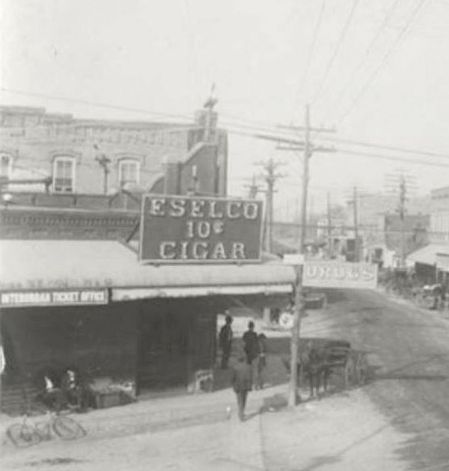 On the east side of Lancaster, a two-story building with “Britton & Collins Drugs” painted on the side dominates the block. The drug store was owned by T. Jefferson (“Jeff”) Britton and J. Willie Collins. Tennessee-born Britton (1874-1926) had opened a well-known drug store in downtown Dallas at the southeast corner of Elm and Akard in the late 1890s (seen here in 1900) — this attempt at an expansion into Oak Cliff does not seem to have lasted long: I find listings for this OC location in only the 1902 and 1903 city directories.

Back to the interurban service (the arrival of which was, no doubt, both a welcomed convenience as well as a financial boon to Oak Cliff residents and businesses): here are the double tracks of the Northern Texas Traction Co.,  running along Jefferson. (More on this interurban line is at the bottom of this post.) 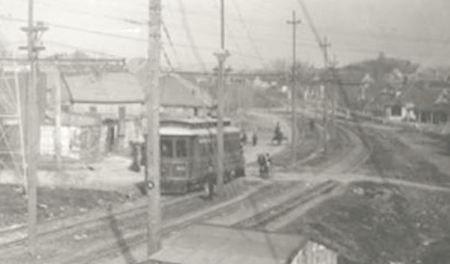 Below is a detail from a 1905 map showing this confusing intersection of E. 10th, Jefferson, N. Lancaster, and S. Lancaster. (As with all images in this post, click to see a larger picture.) 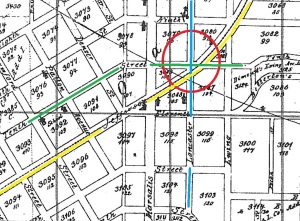 This photo — titled “10th and Lancaster, Oak Cliff, 1900” — is part of the George A. McAfee photographs collection, DeGolyer Library, Southern Methodist University; more information about this photo can be found here.

According to the DeGolyer Library, the photo has the following notation written on the back: “10th & Lancaster. Oak Cliff — looking toward Dallas. Taken 1900.” I think the photo was taken a little later — somewhere between mid-1902 and very early 1904: the Britton & Collins drug store was listed in only two Dallas directories (1902 and 1903), and the interurban service from Dallas to Fort Worth (which passed through Oak Cliff and past the “Tenth St. Station”) did not begin until July, 1902.

Everything you could possibly want to know about the Dallas-Fort Worth interurban line, including mechanical specs and several photographs, can be found in a PDF of the July 18, 1903 issue of the Street Railway Journal, here (the 10-page article “The System of the Northern Texas Traction Company” begins on p. 82). (Lots on “Lake Erie” at Handley can also  be found in this article.)

A few newspaper snippets from the first month following of the launch of the Dallas-Fort Worth interurban service.