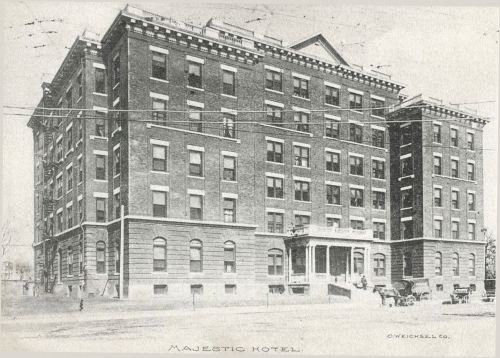 The historic Ambassador Hotel at 1312 S. Ervay in the Cedars was destroyed by fire this morning — the building was 115 years old and was under renovation. Watching news footage of flames engulfing the South Dallas landmark is heart-wrenching.

Built in 1904 alongside City Park, the Majestic Apartment Hotel opened in early 1905. It was designed by popular local architect Earle Henri (E. H.) Silven (who, incidentally, was arrested on suspicion of setting fire to the then-historic Knepfly Building in 1906, a fire which resulted in two deaths, but a grand jury declined to prosecute because of insufficient evidence — I actually wrote about this fire in passing a few years ago in a completely unrelated post).

The Majestic was originally an “apartment hotel” which was more apartment house than hotel, intended for long-term residents. Financial backing of this endeavor was shaky, and the Majestic soon fell into receivership; after a change of owners, the newly renamed Park Hotel opened in 1907. Several years later, in 1933, it became the Ambassador Hotel. Over the 115-year life of the building, these various incarnations came with a dizzying number of owners and operators, and news of its impending renovation and rebirth was heard frequently over the past 20 or 30 years. Recent plans, though, seemed like they were actually going to finally happen. …And now, unfortunately, they won’t.

Below are several images of the hotel, beginning back when Dallasites were still using a horse and buggy to get around. (All images are larger when clicked.) 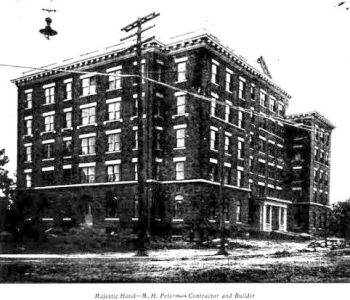 I’m not sure which iteration of the hotel is seen in this postcard, but here it is viewed from City Park, with the Confederate Monument in the foreground:

The Park Hotel opened in September, 1907.

One of my favorite views of the hotel is the one immediately below, taken from City Park, with the Hughes Candy factory at the left (the original photo is here): 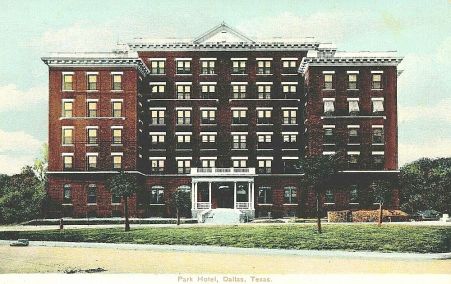 In 1933 the hotel got a new stucco exterior and tile roof and was renamed the Ambassador. 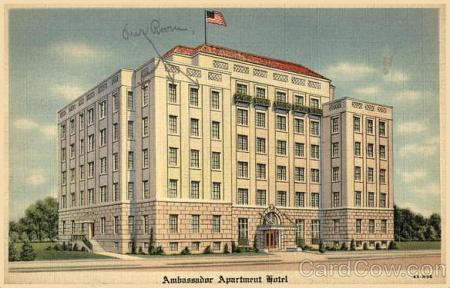 For a while the hotel served as a retirement community — here is an odd, incredibly wordy ad, beckoning retirees with prospects of late-life romance, while also sharing (somewhat) accurate local history: 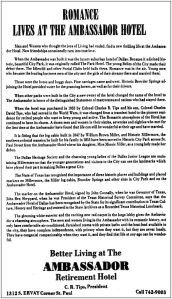 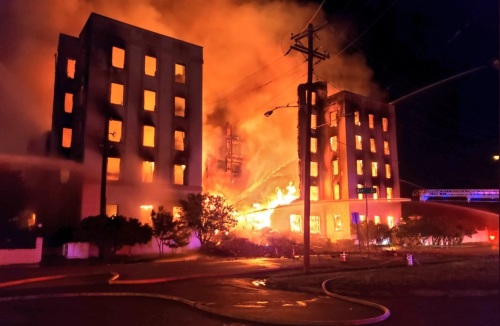 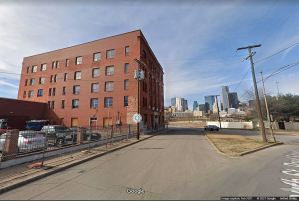 Top image from the Portal to Texas History.

Read a comprehensive history of the building in an article by Harvey J. Graff in Historic Dallas here and here.

Read the 2018 application for inclusion in the National Register of Historic Places (with MANY pages of photos) here.

Coverage of today’s fire can be found on the NBC-DFW site here; a 2017 video walk-through of the Ambassador in happier, more optimistic times can also be found on the Channel 5 site, here.