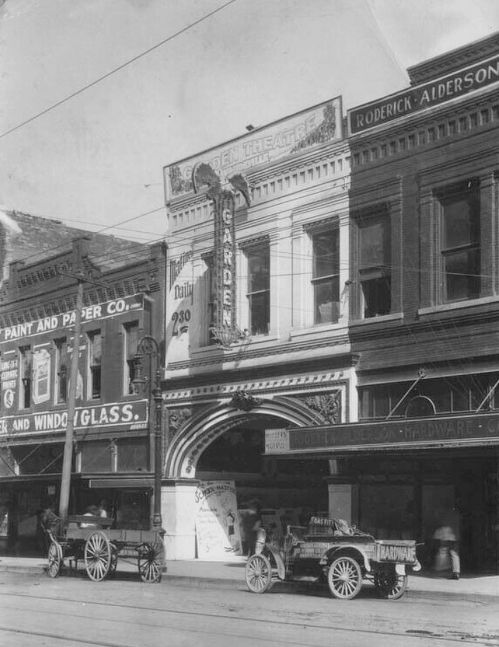 The photo above shows the Garden Theatre, located at 1517 Elm, on the north side of the street, between Akard and Stone Street. It was opened in the fall of 1912 by partners W. J. Brown and R. J. (Ray) Stinnett (who also operated the Cycle Park Theatre at Fair Park). The Garden was a vaudeville stop for touring companies.

It was one of many local theaters which simulcast World Series baseball games via telegraph updates, in the days before radio and TV (I wrote more about this fascinating subject here).

As seen in the top photo, the Garden Theatre sat between the Pratt Paint & Paper Co. and the Roderick-Alderson Hardware Co. 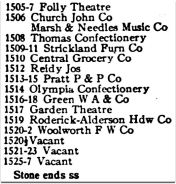 The photo at the top was found on eBay, with the seller-provided date of 1912. Zooming in, one can see a placard in front of the theater advertising the appearance of the Hendrix Belle Isle Musical Comedy Company (misspelled on the sign as “Henndrix”) — for many years this troupe toured with a production called “The School-Master”/”School Days,” the very production seen here on offer to audiences at the Garden. (Read a review of a 1912 Coffeyville, Kansas performance of the troupe’s bread-and-butter act here.)

In April, 1913 Brown and Stinnett split, with Brown taking the Cycle Park action and Stinnett keeping the Garden (and a handful of other theaters).

On March 8, 1915 the theater changed its name and reopened as the Jefferson Theater. As the ad below stated, “This is the only theater in Dallas presenting popular players in repertoire […] Not moving pictures.”

I’m not sure where the “Jefferson” name came from, but….

There were a few back-and-forths as far as operators and leases of the Jefferson, but in 1923, Ray Stinnett “sold” (or probably more accurately sub-leased) the theater in order to concentrate on his other (bigger! better! brighter!) venture, the next-door Capitol Theater, but he reacquired it in 1925 and renamed it the Pantages. (This has caused confusion, with some thinking it had become the Pantages earlier — the confusion is understandable, as the Jefferson was affiliated with the Pantages vaudeville circuit between 1917 and 1920, and during that time the word “Pantages” appeared prominently on the theater’s marquee, but it was still the Jefferson. See a photo from May, 1925, showing the Jefferson from the Pacific side here, after it had become a Loew’s-affiliated theater.)

The Jefferson became the Pantages Theater on December 27, 1928 when Stinnett opened the newly remodeled venue which offered vaudeville stage acts as well as motion pictures. (All images are larger when clicked.)

That incarnation didn’t last too long. Goodbye, Pantages, hello, Ritz. The Ritz Theater opened on October 14, 1928, operated by the R & R (Robb & Rowley) chain but leased from Stinnett. The first film shown was “The Lights of New York,” the first all-talking feature-length movie. 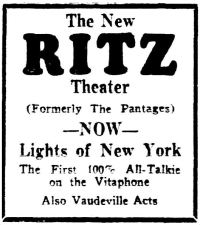 Below, a 1929 photo showing the 1500 and 1600 blocks of Elm Street, the heart of Theater Row: seen here are the Ritz, Capitol, Old Mill, and Palace theaters (the regal Queen was a few doors west of the Ritz, at the corner of Elm and Akard). 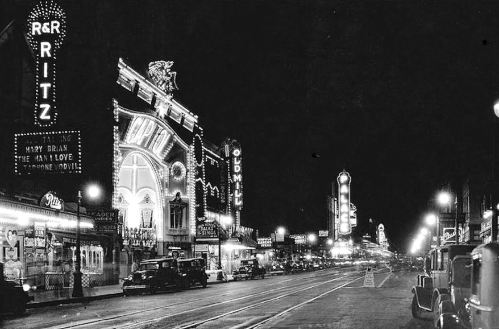 A postcard showing the Ritz (and neighbors) a couple of years later, in 1931: 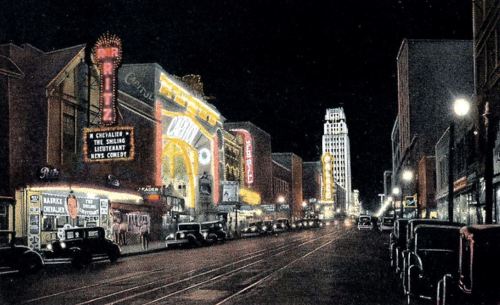 But the Ritz didn’t last all that long either — a little over three years.

In 1931 the theater was acquired by the Hughes-Franklin company (as in Howard Hughes, the super-rich Texan who had an obsession with Hollywood). The plan was to renovate the building and rename it the Mirror, “a duplicate, in so far as possible, of the famous Mirror Theater of Hollywood. A feature will be the extensive use of mirrors in the lobby and foyer” (Dallas Morning News, Nov. 29, 1931).

The Mirror chugged on for several years as a second-run house, apparently less and less profitable as the years passed. On August 4, 1941 the theater burned down in an early-morning fire. The property owner, Vice Admiral Adolphus Andrews, decided against rebuilding.

Here’s the same view as seen above, only now the space next to the Capitol is a nondescript one-story retail building. (The Telenews, a theater showing newsreels, opened in November, 1941.)

photo via the DeGolyer Library, SMU

Top photo of the Garden Theatre is from an old eBay listing.