Who doesn’t love Roger Miller? He was always one of the most effortlessly “cool” entertainers, celebrated as much for his songwriting and singing as he was for his humor and storytelling.

Roger Miller was born in Fort Worth in 1936 but spent most of his childhood in Oklahoma following the death of his father. He launched an entertainment career after a stint in the U.S. Army came to an end. (See an extensive timeline at Wikipedia, here.)

After years of struggling, he finally hit the big-time in 1964 with the hit “Dang Me” and, a few months later, with his biggest hit, the classic “King of the Road.” He won a huge number of Grammys (11 in 1964 and 1965 alone) and was a bona fide star who had incredible crossover appeal for fans of both country music and traditional popular music.

When he came to Dallas in October, 1969 it was for a 3-week run at the Fairmont Hotel’s swanky Venetian Room, and he apparently packed them in every night. Below is a snippet of an interview with WFAA-Channel 8 News in which Roger answers the burning question of whether he was “serious” when he wrote his hit novelty song “You Can’t Rollerskate In a Buffalo Herd” (listen to the song here). His quipped response (which cracked up the Jerry Gray Orchestra behind him) probably didn’t make it to the local airwaves in 1969: 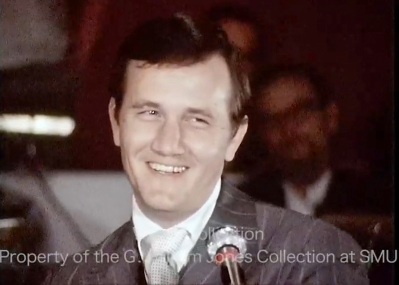 (As an interesting sidelight, in an interview with Philip Wuntch of The Dallas Morning News (Oct. 19, 1969), Miller said that he and his wife had been in Texas for a few days prior to his Venetian Room engagement looking at houses in both Dallas (his mother was then residing in Fort Worth) and San Antonio (his wife’s hometown). Nothing apparently came of this, but it certainly would have been nice to have been able to claim Roger Miller as a Dallas resident!)

He was in town a couple of years earlier, in 1967, and sat down for a Channel 8 interview which was a bit more sedate — it took place in the American Airlines “Celebrity Room” at Love Field as he was passing through Dallas on his way to San Antonio with his wife and young son, Dean Miller:

On this trip, newspapers reported that he was shuttled about in private Lear Jets and Rolls Royces — a big change from his early days when he picked cotton, hitchhiked, slept in cars, and stole milk off front porches.

Roger Miller died in 1992 at the age of 56 from complications of lung cancer.

Below are a few ads from Roger Miller’s DFW appearances. He played large venues like the Big D Jamboree in Dallas and Panther Hall and Northside Coliseum in Fort Worth, but he also played a lot of little clubs as he worked his way up to becoming a major recording artist and television personality.