The end of the year means lists. Here are my favorite images — photos, postcards, artwork — posted in 2019. (All images are larger when clicked.)

I love vintage travel posters, and the mid-century posters done for Braniff Airways are among my favorites (see a whole bunch here). The one above satisfies my love of this period of commercial art, as well as my love of Texas kitsch and, yes, oil-well imagery. It also happens to be one of the most recent additions to Flashback Dallas, having been posted only yesterday (!) in the post “Orphaned Factoids: Year-End Grab Bag, 2019.”

The rest I’ll go through chronologically, starting with a 1955 photo by Joe Scherschel which was part of a Life magazine spread on the Republic National Bank Building, with several photos featuring the iconic “star” design seen on the embossed aluminum panels that cover the exterior of the building. The photo of the staff uniforms emblazoned with that design is just great — from the January post “Republic Bank Branding — 1955.”

More Texas kitsch, from a Dallas Chamber of Commerce-approved matchbook cover, was seen in the January post “Enjoy That Dallas, Texas Hospitality.”

I love aerial photos, especially ones that show huge expanses of undeveloped land in areas which are now heavily developed, like this one, also from Joe Scherschel of Life magazine, showing brand-new Temple Emanu-El in 1957, looking north from Northwest Highway, with an empty swath of North Dallas behind it. From the January post “Temple Emanu-El, At the ‘Northern Limits of Dallas’ — 1957.”

I have fond (if somewhat vague) memories of the original Stoneleigh Pharmacy (now the Stoneleigh P, totally rebuilt after a fire), and I was very excited when I came across a photo of that block from its very earliest days in 1923. It’s a fuzzy, grainy, low-res photo from The Dallas Morning News, but just seeing it evokes a kind of Proustian response of instant nostalgia. From the February post “Stoneleigh Pharmacy / Stoneleigh P.”

Another great aerial — this one from the 1940s showing the Casa Linda shopping center in East Dallas — showed up in the February post “Casa Linda Aerials — 1940s.“

In March I posted a photo of the first house I ever lived in which turns out to have been part of the historic Cole farm. The stone house was on Cole, near North Dallas High School, and my parents swore it was the coldest place they had ever lived. By serendipitous happenstance I was sent both a photo of the house around 1900 (seen below, from the Warlick family archives) as well as a photo of the house a few years before it was torn down — two photos I never thought I would see! From the post “My First Home — 3809 Cole Avenue.” 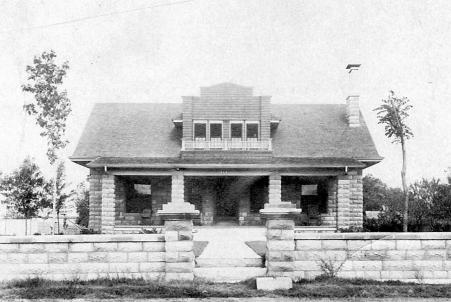 This is a great drawing of a map of Dallas neighborhoods by artist Ashley Bond (whom, I discovered, was the father of “Tommy” from the Our Gang/Little Rascals comedies) — it appeared in a Dallas Chamber of Commerce publication. From the March post “‘Birdseye View of Greater Dallas’ by Ashley Bond — 1925.” 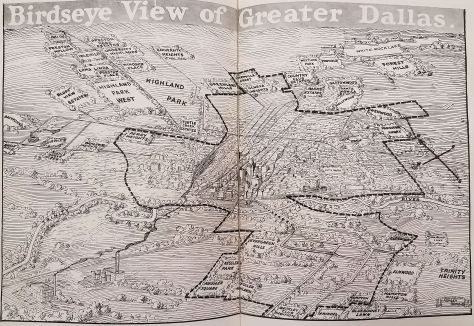 This photo of a block of Bryan Street in Old East Dallas is just fantastic. It is from the City of Dallas Historic Preservation Program archives and was featured in the May post “The Star Lounge, 4311 Bryan.”

Also from May, a photo of the last location of The Aldredge Book Store, my father’s store on Maple Avenue. The building was demolished a few years ago to make room for a driveway for the next-door Stoneleigh Hotel, and this is one of the only pictures I have of the place. The photo was taken by my brother, Erik Bosse, and was featured in the post “The Aldredge Book Store — 2909 Maple Avenue.” 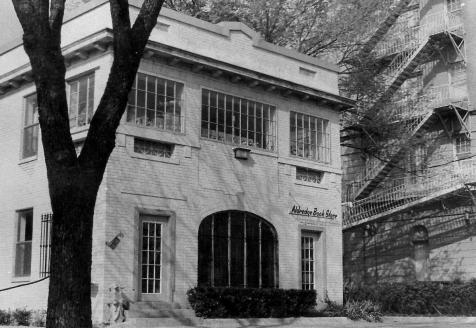 The 115-year-old Ambassador Hotel burned down in May — I wrote a post which contained a lot of old postcards of the building in its various incarnations, and this postcard from its time as the Park Hotel is my favorite, with the Hughes Brothers building on the left, the hotel in the center, and City Park on the right. From the post “The Majestic Hotel/The Park Hotel/The Ambassador Hotel: R.I.P. — 1904-2019.” 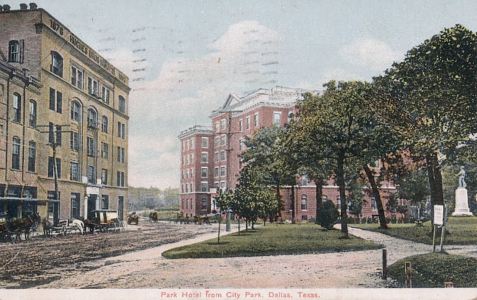 I love odd photos and postcards where you’re staring at them, shaking your head, and saying “What am I looking at here?” This is one of those images. I loved researching this moody commemoration of the lighting of Elm Street’s new streetlights in 1911 — another instance where wondering what something is leads to learning about a really interesting forgotten piece of history. From the June post “The Grand Elm Street Illumination — 1911.”

Maybe it’s the pinks and greens and lush feel of this very “pretty” image, but I really love this Butler Brothers postcard. From the June post “Butler Brothers Building, As Seen From the Praetorian.”

I wrote about actor Rip Torn and his Dallas connections when he died in July. One of the photos I included was the one below of his first-cousin, Sissy Spacek, from the 1968 Quitman High School yearbook, showing her looking mod and groovy (and mostly unrecognizable). From the post “Rip Torn and Ann Wedgeworth’s Dallas Wedding — 1955.”

Also from July was this cool postcard of the Magnolia Building, from the post “Urban Landscape with Biplane.” All that’s missing is King Kong.

My “dream house” is a small industrial building at Mockingbird and Greenville made to look like a small house. I’ve loved it my whole life and took this photo several years ago. From the August post “My Dream House at the Greenville Avenue Reservoir.“ 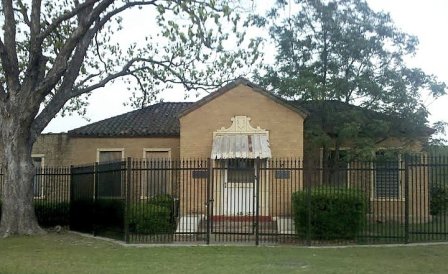 I’m not sure why I love this Methodist Hospital postcard so much, but I do. From the November post “A Few Random Postcards.” 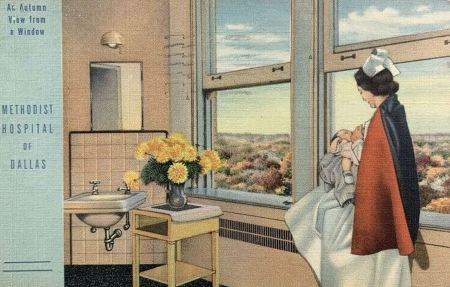 And there were two photos I really liked which I came across this year and added to older posts.

This appropriately eccentric photo of Salvador Dali at Union Station in 1952 is from the Hayes Collection at the Dallas Public Library and was added to the 2015 post “Salvador Dali Brings ‘Nuclear Mysticism’ to Dallas — 1952.”

And this photo of the MKT passenger depot, formerly at Ross and Market was added to the 2014 post “Leaving Dallas on the Katy Flyer — ca. 1914.”