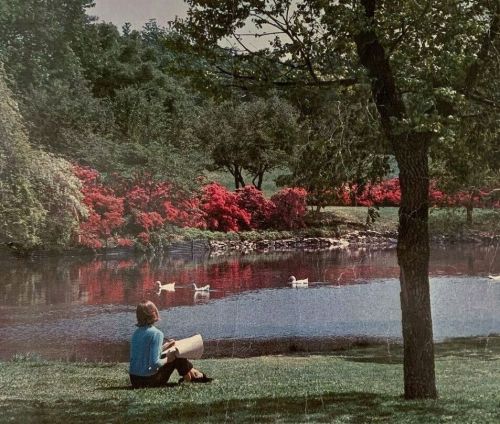 I just realized I haven’t seen the azaleas this year. I don’t really hear about people doing it anymore, but when I was a kid, my mother always made a point every Spring to drive us around Highland Park, Exall Lake, and Turtle Creek to see the beautiful azaleas, which were in bloom everywhere you looked.

Local lore has it that the first big splash azaleas made in Dallas were in the early 1930s when Joe Lambert, Jr. (of the still-going-strong, 100-plus-year-old legendary Lambert’s Landscape Co.) imported 100 or more plants from Shreveport to Dallas — to the home of Mr. and Mrs. Walter W. Lechner in the 6900 block of Lakewood Boulevard. Azaleas apparently don’t grow well in Dallas soil unless you know what you’re doing, and Lambert knew what he was doing, because his azaleas thrived in Lakewood, and they were a huge hit with people who would drive from miles away to look at the exotic blooms.

That success led to numerous calls from residents of Highland Park, which, in turn, led to lots and lots of landscaping work for the Lambert family — so much so that they moved their business from Shreveport to Dallas.

Of particular note was the estate of Mr. and Mrs. Fred Penn at the corner of Preston and Armstrong where azalea bushes were planted terrace-like to prevent soil erosion on the part of their property which sloped down to the banks of Turtle Creek. One newspaper report said there were more than 500 azalea bushes on the Penn estate. It caused a sensation — the plants began to pop up all around Turtle Creek, and people flocked to Highland Park to see them.

In a 1971 newspaper article it was estimated there were 50,000 azaleas in Dallas parks. I have no idea what the number is these days, but for two weeks every year, it is an absolute pleasure to drive around Highland Park and Oak Lawn — and every other part of town where azaleas bloom — and to enjoy Dallas’ brief, very pretty springtime.

A Channel 5 news story from 1979 (which you can watch here) says that azaleas was first brought to Dallas by the La Reunion settlers, which would have been in the 1850s. The earliest mention I could find was in an 1886 ad in The Dallas Morning News — there were several other ads before the turn of the century offering the exotic “imported” plants for sale.

In the 1950s there was an explosion of interest in people heading to Lakeside Drive every spring in order to commune with nature and gaze lovingly at the profusion of azaleas. I mean, lordy, read this breathless ode to the azalea in this detail of a Neiman-Marcus ad. (These little essays by “Wales” appeared regularly in N-M ads — I always suspected they were written by Stanley Marcus,  but “Wales” was apparently Warren Leslie, a Neiman’s executive and spokesperson who later wrote the controversial book Dallas Public and Private.) (Click for larger image.)

And here’s evidence of the bumper-to-bumper traffic along Lakeside Drive and the mass of humanity armed with cameras converging on the banks of Turtle Creek in (silent) footage from Channel 8, shot on April 10, 1960 (it seems almost criminal, though, that the film is in black and white!) — the pertinent clip begins at the :43 mark. (From the WFAA Newsfilm Collection, G. William Jones Collection, Hamon Library, SMU.) 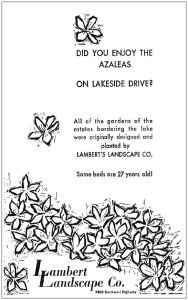 Another WFAA clip, this one from 1972, which shows azaleas in COLOR — not in Highland Park, but in downtown Dallas during the 3rd annual Azalea Festival: 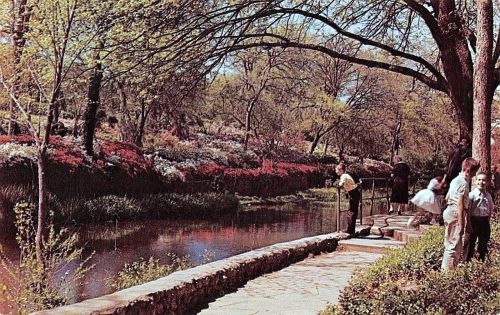 And here’s a photo I took a couple of years ago of my favorite searingly hot-pink variety (seen here before the peak of the blooming period — note the still bloomless bush to the right): 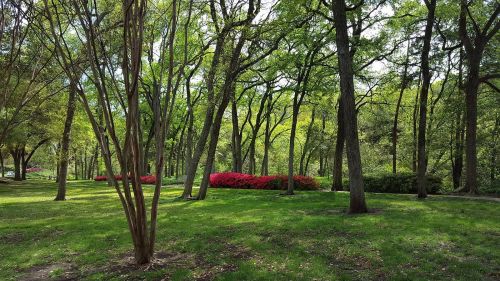 Sorry I missed you, azaleas. Next year, for sure.

Top photo is from the cover of Southwestern Bell’s 1968 Dallas phone book.