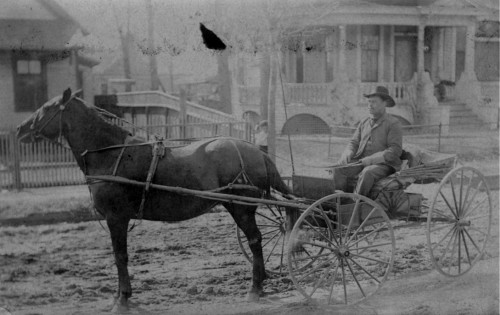 When wandering around the internet, one often encounters arresting images. Like the one above. There’s something about that photograph that grabs your attention. The stoic man in the buggy, the stiff, straight-standing horse, the child hiding behind the pole, the partial view of the porch of a fancy house, and the horrible, horrible condition of that street. The description reads simply: “Photograph of Jordan Moore seated in a horse-drawn carriage. Houses are visible in the background.” I wondered if I should know who Jordan Moore was, because the name wasn’t familiar. The photograph was in the collection that had been donated to the Dallas Historical Society by J. L. Patton, a prominent African-American educator. I found a few more photos of Mr. Moore in Patton’s collection, but I still had no idea who Jordan Moore was. So I did a little research.

Jordan Moore was born in Virginia in 1863. At some point he made it to Texas, perhaps in the early 1880s, and then to Dallas a few years later. By 1893 he was working for Mrs. Miranda Morrill, who had moved to Dallas in 1886, following the death of her husband, Judge Amos Morrill. Though born in Tennessee, Mrs. Morrill had moved to Texas as a child in 1834 and had strong ties to the state (one of her uncles was a signer of the Texas Declaration of Independence). When she arrived in Dallas, she built an imposing mansion at Ross and Harwood and, as she had no children, she and her servants (as they were listed on census forms) had that huge house to themselves to ramble around in. Mrs. Morrill was a prominent mover-and-shaker in town, devoting her time and money to a host of worthy social causes. In her employ was Jordan Moore, who is listed variously as her coachman and yardman, and who resided on the property. He worked for her until she died in 1906 at the age of 80.

In 1907, after Mrs. Morrill’s death, Mr. Moore had moved to rooms elsewhere and went to work as a porter for the very large, very successful Huey & Philp Hardware Company at Griffin and Elm. Below are a couple of photographs of Moore and co-workers on the loading docks. He does not look very happy. He stayed at the job for 11 years but moved around from rooming house to rooming house — from Ross to Cochran to N. Harwood to Masten. (One of the captions on these photos states that Mr. Moore purchased a house on Cochran St. in 1900. I don’t think that’s correct. If he did buy a house, he doesn’t appear to have ever lived in it.)

Jordan Moore died on January 22, 1918, from complications of  diabetes. He was 54. He never married and had no children, and the friend he had been staying with when he died offered scant and approximate guesses as to dates and places when asked to supply them for the official death certificate.

I wondered why all these photos of a man who apparently left no family and had lived a fairly commonplace life had made their way into the personal collection of J. L. Patton, a principal at Booker T. Washington High School and a pioneer in education for African-American students in Dallas. And then I noticed that the name of the “informant” on the death certificate was Samuel Stanton, a long-time friend with whom Moore had been staying in his last days. Moore was the godfather of Mr. Stanton’s daughter, and Mr. Stanton’s daughter was Mr. Patton’s mother. Patton would have been 12 when Moore died, and he would certainly have remembered him — and one hopes he had fond memories of him.

Jordan Moore was buried in Alpha Cemetery, one of the few “negro” cemeteries of the time, near the old freedmen’s town of Alpha, near present-day Preston and Alpha Road. Below are more photographs of Mr. Moore, now in the collection of the Dallas Historical Society. 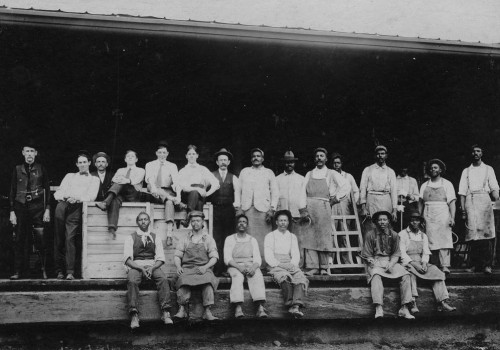 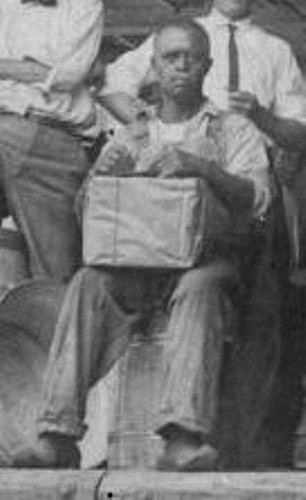 The Morrill house — next stop: demolition, 1920

The first photo of Mrs. Morrill’s house at Ross and Harwood is from Clifton Church’s book Dallas, Texas Through a Camera (Dallas, 1894). (As an interesting aside, Church was married to Morrill’s niece.) In the book Dallas Rediscovered, the house is described thusly: “Mrs. Miranda Morrill’s dark, brooding residence, completed in 1886 by A. B. Bristol at the southwest corner of Harwood, was leveled in 1920 for construction of the First United Methodist Church.”

Lang & Witchell drawing of the Huey & Philp building is from a Dallas Morning News blog post by Steve Brown, here.

More on the accomplishments of J. L. Patton from the Handbook of Texas, here.