The Trinity River at the City’s Doorstep 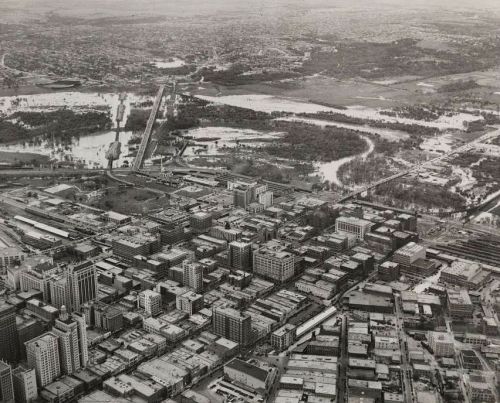 What? You didn’t know the Trinity River was straightened? (click for larger image)

Back before Dallas decided to straighten out the Trinity River and move it a mile or two to the west (in an attempt to prevent future flooding), the river ran only about a block from the Old Red Courthouse. It’s so strange looking at this picture and seeing a river in a place where we’ve never seen it. It’s a shame they moved it (who knew you could “move a river”?), but flooding was a major issue, and, in fact, it looks like there was flooding the day this photo was taken. Below, you can see a magnified view — it looks so different from what we’re used to that it takes a second to get your bearings. Imagine how different Dallas would feel today if the Trinity had been allowed to run its natural course.

Photograph by Lloyd M. Long, from the Edwin J. Foscue Map Library, Central University Libraries, Southern Methodist University; it can be seen here (with many of the buildings labeled) and here (without the labeling).

SMU has the photo dated “ca. 1930s or 1940s,” but I think it may be from the late ’20s. I’ve seen non-specific dates of the river’s realignment from the 1920s to the 1930s, but a couple of landmarks in the photo above place it sometime between 1925 (the year the Santa Fe buildings were constructed) and 1933 (the year the Hippodrome Theater — seen here, on Pacific — became the Joy Theater).

UPDATE: The river was straightened in 1928. See fascinating information about the when, where, why, and how of the Trinity River realignment, below in the comments — it was a true feat of modern engineering.

19 Comments to “The Trinity River at the City’s Doorstep”