Ernie Banks: From Booker T. Washington High School to the Baseball Hall of Fame to the Presidential Medal of Freedom 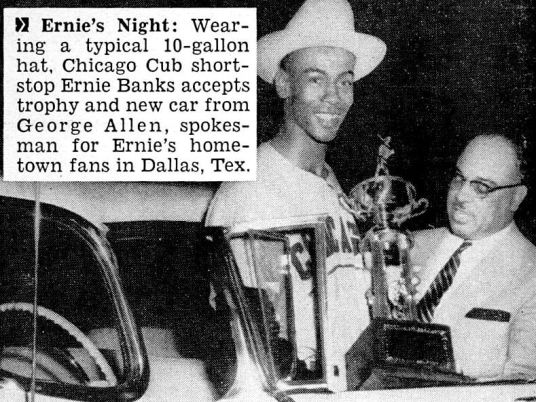 Ernie Banks, the baseball player so indelibly linked with Chicago that he is known as “Mr. Cub,” is a Dallas native whose professional career began when he was spotted by a Negro League scout while playing softball in a park near his high school, Booker T. Washington. He was recruited right away and made his mark almost immediately, and, in 1953, he and Gene Baker became the first African-American players signed to the Chicago Cubs.

One of the sport’s most popular players, Banks, who began his career playing shortstop, routinely shattered home run records and was a perennial MVP and All-Star player. Even though his Cubs never made it to the World Series, Banks was a stand-out player, and his election to the Baseball Hall of Fame in 1977 came as no surprise. I have to admit, my knowledge of baseball is scant, but I love this man, and it’s a testament to “Mr. Cub” that he is as famous for his genuine nice-ness as he is for his undisputed skill as a player. 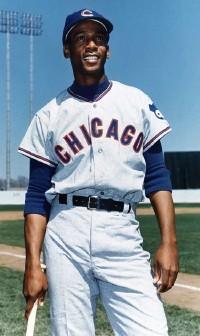 Top photo from Jet magazine, Nov. 3, 1955; a version ran in The Dallas Morning News on Oct. 12, 1955 above the following caption: “Honors came thick and fast for Ernie Banks at Burnett Field Tuesday night. Appearing with a group of barnstorming Major League All Stars, Banks was presented a new Oldsmobile (background), a Texas style hat and scrolls and trophies. With Banks is George Allen, chairman of the citizens’ appreciation committee which presented the automobile. The mayor [R.L. Thornton] proclaimed Oct. 11 Ernie Banks Day in Dallas.”

Check out these articles from The Dallas Morning News archives:

A nice overview of Ernie Banks’ career titled “Nice Guys Don’t Always Finish Last” by Steven Schmich (from his larger article titled “Five Dallas Athletes Who Made a Difference”) can be read in the Spring, 1994 issue of Legacies magazine here. (In fact, the entire issue of this Dallas history journal is devoted to sports and is available to read in its entirety, beginning here.)

In November, 2013, Ernie Banks was awarded the Presidential Medal of Freedom. A few short words from him after the ceremony say all that really needs to be said from this wonderful man — watch the short video here.

UPDATE: Sadly, Ernie Banks has died. He died Friday, January 23, 2015. He was 83. The New York Times obituary is here; the Chicago Tribune’s wonderful collection of tributes and photos is here.