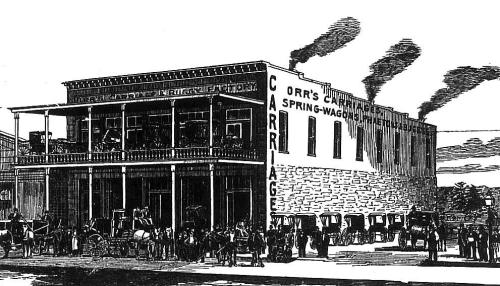 I came across the image above in the 1878 Dallas city directory, and my eye was immediately drawn to the novel open-air display of  buggies on the second floor of the building. I’ve never seen this before — the frontier version of the auto showroom!

I hope this is a depiction of the actual shop owned by W. W. Orr at 724-726 Main Street (corner of Main and Martin — see map below) and not some sort of early augmented clip art. Orr ran a successful business selling buggies, phætons, and carriages, and he probably did have an imposing shop.

William Wallace Orr was born in Ohio, and after the Civil War he made his way to Texas, where he served for a short time as an East Texas postmaster before coming to Dallas where he and his wife, Amanda, operated a livery stable.

I’m not sure whether “epizootic” is used here as some sort of 19th-century tongue-in-cheek hard-sell advertising term (“His prices are INSANE!“) … or whether it means the horses have some sort of disease. I tend to think it’s the former.

The carriage business, which had started by 1878, is notable (to me, anyway) because it was housed in a building with a basement — I wasn’t aware that basements really existed in Dallas at the time. Orr rented out the basement beneath his “carriage repository” as a beer cellar. If TV westerns are anything to go on, drunken brawls in most drinking establishments of the time were to be expected. What might not be expected is an account of a bar fight to be reported like this: 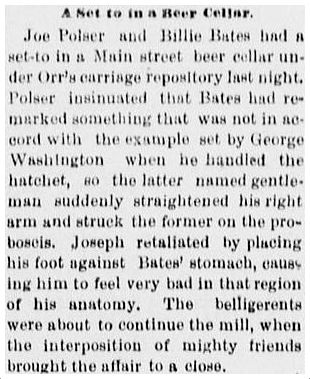 Regardless of what disreputable activities were going on in the cellar, it seems that Orr’s business of manufacturing and selling “everything on wheels” was a booming one.

He had stylish conveyances, cheap prices, and good goods:

After the death of his wife in 1886 (she died of consumption at the early age of 42), Orr passed the business to his son. In poor health, he left Dallas for Mississippi, where he met a woman who nursed him back to health and whom he later married. After a few years of an apparently happy second marriage, W. W. Orr died in 1894. Cash savings, investments, and real estate holdings back in Dallas had left him a wealthy man, and, as might be expected, his family in Dallas was dismayed to learn that he had left his estate to his infant daughter in Mississippi. His three grown children from his first marriage were not happy, and they contested the will. (The case is covered exhaustively here. I think the baby daughter emerged victorious, but I’m not absolutely sure.)

It’s interesting that Orr and his first wife are buried side by side in Greenwood Cemetery. Amanda Melvine McQueen Orr has a large, ornate monument and headstone; W. W. has his name — and nothing else — carved into an unadorned marker. It would have been nice to have had a little a buggy in the corner. …Something.

The location of Orr’s buggy and carriage house was at the corner of Main and Martin, shown above in a map from around 1900. (Click for larger image.)

And, below, is the full ad, with that incredible artwork! (Click it!)

All other ads from The Dallas Herald, as noted.

Map is a detail from a map of Dallas, circa 1900, from the Portal to Texas History, here.