I love streetcars, photos from the 1940s, fashions of the ’40s, and views of the Dallas skyline. And here are all of these things, in one great, GREAT photograph. We see people waiting for the streetcar on a sunny Saturday in February, 1946 — in Oak Cliff, at E. Jefferson Blvd. and Addison St. The people at the left (outside Helen’s Sandwich Shop) are about to catch the car that has just crossed the Trinity River and head into Oak Cliff; the people on the right are waiting to go to Dallas. The Oak Farms Dairy is just out of frame at the top left, and Burnett Field is just out of frame at the bottom right. The Dallas skyline looms across the Trinity.

Below, I’ve zoomed-in a bit and cropped this fantastic photograph into two images to show, a bit more intimately, details of an ordinary moment in an ordinary day of ordinary people. What once was such a commonplace scene — people waiting for a streetcar or interurban — now seems completely out of the ordinary and quaintly nostalgic. (Nostalgic on its surface, anyway — not shown is the interior of the car which had specific black-only and white-only seating areas for passengers.) (As always, click for larger images.) 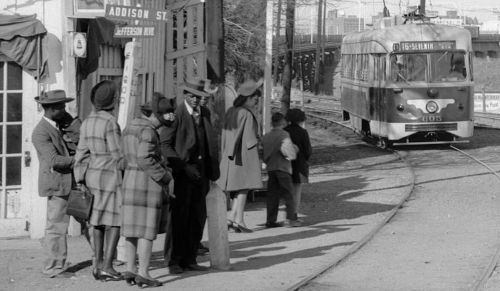 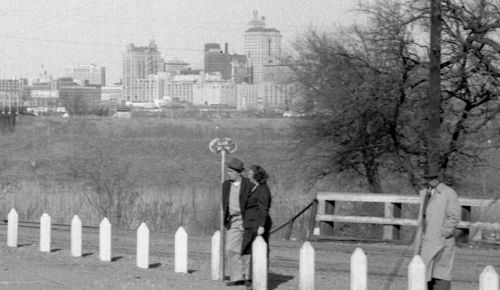 The same stop can be seen in this undated photo (source and photographer unknown): 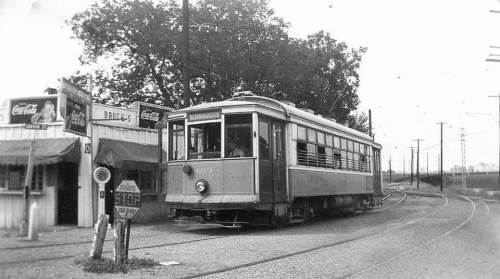 Streetcars ran back and forth across the Trinity River on a special trestle just south of the Oak Cliff Viaduct/Houston Street Viaduct. It had been in use since 1887 (through various renovations) and was demolished in the early 1970s to build the present-day Jefferson Street Viaduct.

To see a photo by the same photographer showing a streetcar actually on the trestle over the Trinity, see the post “Crossing the Trinity River Viaduct — 1946,” here.

Streetcar enthusiasts are incredibly, well, enthusiastic, and they keep precise track of where cars operated over their life spans. The car from the photo — Dallas Railway & Terminal Co. car #605 — was a PCC streetcar, built by the Pullman-Standard company in 1945; it was sold to the MTA in 1958 and was in operation in Boston for many years. See cool photos of the very same streetcar in operation over the years in both Dallas and Boston, here (scroll down to “605”). To see what the retired car looked like in 2002 — a bit worse for wear — click here.

A distinctly less-wonderful view from roughly the same location, seen today, is here.