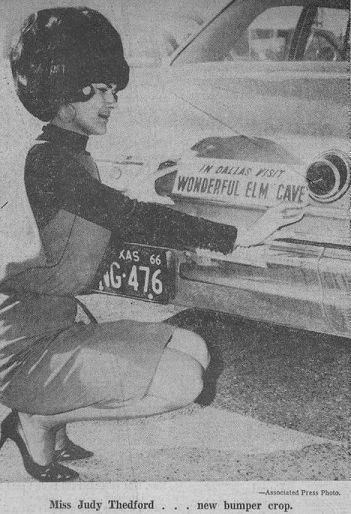 In the wee hours of the morning of  Jan. 11, 1967, a giant hole opened up on the south side of Elm Street — 200 yards long, 20 feet wide, and 15 feet deep — running roughly the entire length of the block between Griffin and Field. It was assumed that there was some connection between the cave-in and the adjacent construction of One Main Place. During the ensuing investigation into a cause, the consultations with geologists, the lawsuits, the repairs, the back-filling, etc., this very busy stretch of Elm was closed for an incredible seven months (!). Most of that time it was a gaping hole.

The hole was a major headache to city leaders and to downtown developers (…and to motorists), but it became an ongoing joke to everybody else. The “Elm Street Cave” and “Elm Street Cavern” were referenced everywhere for most of 1967. San Francisco had “The Summer of Love” that year, Dallas had “The Elm Street Cave-In.” It was the butt of endless jokes in local, out-of-town, and even out-of-state newspapers. A band sprang up calling themselves The Elm Street Cave-Ins. 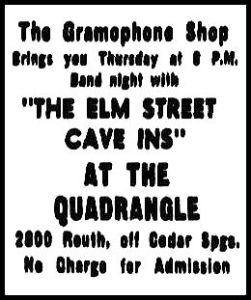 A group of local lawyers known as The Skid Row Bar Association proclaimed to the press that it was “the last remaining scenic wonder in Dallas.” Curious tourists were drawn to the hole like camera-laden moths to a flame. “Talk about your ‘Deep Elm’!” became a punchline much bandied about by people who didn’t understand that something like that is moderately amusing once or twice, but that it tends to lose its sharpness after it’s repeated ten or fifteen times. And, bizarrely, it even found its way into an oddly defensive Sears ad (click to see a larger image). 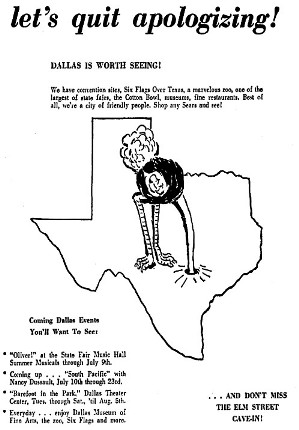 The hole was eventually filled in, and, in August — after months of jokes and inconvenience — the street was finally re-opened. Life returned to a pre-cave-in normalcy. The reason for the collapse was determined to be shifting rock formations below street level. One report said that workmen had “uncovered a huge crevice in the limestone beneath the street measuring 30 feet deep. They filled the crevice with concrete and tied together the broken sections of rock.” I’m not sure how comfortable I’d feel about a giant building sitting on shifting shale-covered limestone,* but apparently everything’s been fine ever since, and everyone — the engineers, the geologists, the One Main Place developers and tenants — lived happily ever after.

Associated Press photo of the lovely Judy Thedford and her fashionably large hair posing rather incongruously beside a car bumper appeared in newspapers across the country on Feb. 12, 1967. This scan is from the Red Oak Kid’s Flickr page, here.

The weird “Let’s quit apologizing! Dallas is worth seeing!” ad comes from a larger Sears advertisement that appeared in July, 1967.

*For people who (unlike myself) know something about geology, an article written in 1965 about the special problems regarding the One Main Place excavation and construction (“How to Support Skyscrapers” by Martin Casey — DMN, Nov. 28, 1965) might be interesting. There is much mention of Austin Chalk Limestone and Eagle Ford Shale which made the One Main Place project quite troublesome to engineers.