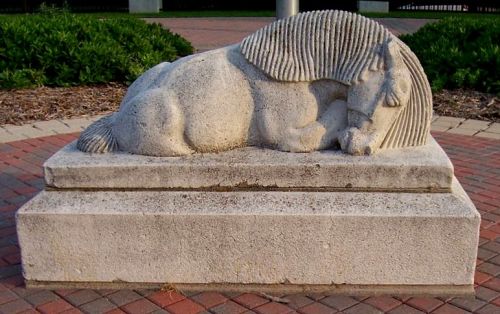 When Peruna — SMU’s beloved Shetland pony that served as the Mustangs’ first live mascot — died in 1934, there was an immediate call to erect a memorial monument over the little horse’s grave, but it wasn’t until 1937 that a serious push for the erection began. Money was raised by the student council, which asked every student to contribute at least ten cents to the fund, and the search was on for the right sculptor.

The commission went to young Michael G. Owen, Jr., who, at only 21, was the same age as many of the students who were hiring him. (It has been erroneously reported that Owen attended SMU, but he did not.) Michael Owen was well-known within the Dallas art community and had made a mark for himself as something of an artistic prodigy — as a teenager, he had been on the periphery of the movement that spawned the Dallas Nine group of Regionalist artists, and he had  been mentored by many of the older artists, most notably Jerry Bywaters.

Owen worked quickly and completed the memorial — which was six feet long and four feet high and carved from 2,800 pounds of hard limestone — in time for the unveiling just outside Ownby Stadium on May 19, 1937.

The result was a quietly emotional — and even a very sweet — monument depicting the small slumbering horse atop a stone slab, with an inscription reading “Peruna I.” Jerry Bywaters wrote a glowing review of the piece, even though he seems a bit taken aback to find what he called “a memorial to a midget horse” on a college campus to be “one of the best pieces of memorial sculpture in the State.”

“Accustomed to seeing rather bad sculptured monuments erected to Confederate soldiers, Texas Rangers, political dignitaries or such abstract ideas as justice, plenty, or  beauty, it is slightly confusing to find a very good piece of sculpture set up as a memorial to a midget horse. […] Whatever the paradox of the situation, this monument is surely one of the best pieces of memorial sculpture in the State.” (Jerry Bywaters  in The Dallas Morning News, May 23, 1937)

When Ownby Stadium was demolished and the new Ford Stadium built, the Peruna I monument was moved to the new stadium where it has become a memorial to all the Perunas.

With Peruna III, during WWII (Wikipedia)

Photo of Peruna III with sailors from the Peruna page on Wikipedia, here.

UPDATE: Read about a recently discovered large painting by Owen up for auction in Dallas in 2019 here.

The previous post on the untimely demise of Peruna is here.