Oak Cliff Pier? Just one part of Dallas’ urban future as envisioned in 1967…

In 1967, the Dallas chapter of the American Institute of Architects unveiled a project it had been working on under the sponsorship of the Greater Dallas Planning Council for over a year — a 40-minute color slide presentation with recorded narration called “The Walls are Rising,” directed by writer-photographer Ron Perryman of Austin. Enslie “Bud” Oglesby — one of Dallas’ top architects and the chairman of the committee behind the project — said of the film:

I saw here an opportunity to demonstrate the problems which poor planning bring and the results that can come from a sound, unified planning program…. (Fort Worth Star-Telegram, June 18, 1967)

The rather more urgent tone of the brochure that accompanied the film was a bit more dire:

We cannot afford to lose any more time in developing a coordinated plan to make Dallas a more beautiful and effective city, for all around us the walls are rising, the city is being built… We are designing by default instead of summoning our vitality, wealth resources, talents and human vision to create a design plan that will give Dallas quality and character all its own.

The goal of the project was to create awareness among city officials, planners, and designers (as well as among the public) of the immediate need to address the conscious physical design of the city in order to improve its future “livability.” The argument was that the city of Dallas was, in 1967, an unplanned and uncoordinated chaotic urban environment dominated by (and practically strangled by) the automobile; it was overwhelmed by traffic, noise, and visual clutter, and it lacked much-needed green spaces and personal “refuges.”

It was stressed that the film was not a plan, per se, but was, instead, an outline of suggestions that the AIA and the Greater Dallas Planning Council were proffering for discussion (and, one assumes, hoping would be implemented). Among their suggestions were the following (some of which have been adopted, but many of which have been “on the table” for decades now and which Dallas leaders continue to debate):

As fun and fanciful as fresh ideas on getting to Oak Cliff are, the film seems to have been more of a warning of what the city’s future might be if it continued down its then-current path of … having basically no plan at all. The film started off by assaulting the viewer’s senses with several minutes of “blaring, cacophonous music” and a rush of chaotic images — and opened with the ominous words, “We are living in an accident.” The League of Women Voters issued a report in 1968 called “Crisis: The Condition of the American City” in which they described “The Walls Are Rising” as “a horror film.”

What sounds a bit like a sophisticated A/V presentation was screened for dozens and dozens and dozens of groups in the Dallas area between 1967 and about 1972: it was shown to various Chambers of Commerce, Rotary, Kiwanis, and Lions clubs, women’s groups, church groups, business groups, arts organizations, and on and on and on. The film would usually be introduced by an architect who would also lead a discussion and answer questions afterward. If you were a member of a civic or professional group in the late ’60s, chances are pretty good you saw “The Walls Are Rising.”

Which is why it’s so surprising that all traces of the film seem to have vanished in the intervening years. I contacted the Dallas Municipal Archives, the Texas/Dallas History & Archives Division of the Dallas Public Library, AIA Dallas, and Dallas Center for Architecture. Everyone was very helpful, but … nothing. Designs for Dallas and the later Goals for Dallas are better known projects, but it seems that there would be something connected with this film lying around somewhere. I’d love to see it. It sounds like it would be entertaining and informative … and depressing. We’ve come so far. …We haven’t come far at all. 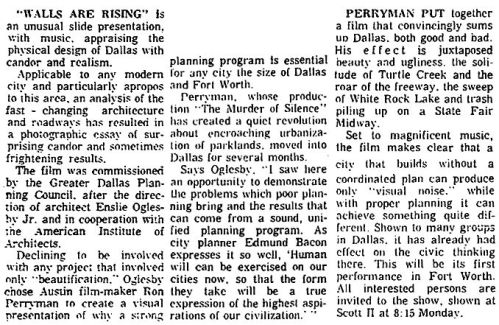 “The Walls Are Rising” was introduced to the Dallas public in Dorothie Erwin’s article, “A Design for Dallas Proposed,” which ran in the Feb. 12, 1967 edition of The Dallas Morning News. Additional descriptions of the film can be found in the article “A Courageous Look at Today’s City” by Larry Howell (DMN, May 3, 1968).

UPDATE: Jan. 9, 2015 — Great news! AIA Dallas has found the film and has scheduled a screening!

UPDATE: Jan. 20, 2015 — The public screening and panel discussion at the Sixth Floor Museum was great! Read about it here.

UPDATE: May, 22, 2015 — AIA Dallas has digitized and uploaded the film to Vimeo. Watch the complete film here.