I’ve always had a fascination for old advertisements. Ads for local products and businesses are particularly interesting and can be quite informative — especially those that feature photographs of the businesses being advertised. I always get an exciting little jolt when I see a still-standing building that I recognize in a 50-, 60-, or 70-year-old ad. Below are a few ads from 1929 — 86 years ago! — featuring buildings that have somehow survived the wrecking ball. Not all of them are architecturally interesting, but they’ve all seen a lot more than you and I have. Click the ads below to see larger images of the buildings.

Above, the Boedeker Ice Cream plant — the “finest in the South,” located at S. Ervay & Griffin (1201 S. Ervay). The company was founded in 1887 by German Frederick Boedeker, the first ice cream manufacturer in Dallas. This building was built, I believe, around 1921. I’m not sure what’s in there these days (if anything), but here  is it today, via Google Street View:

UPDATE: Apparently there are plans afoot — read about them here.

Next, the Dallas Tent & Awning Company at 3401 Commerce.

This very successful company moved several times to larger and larger spaces, until they decided to build their own showroom and manufacturing plant in 1921. A 1922 Chamber of Commerce ad described the building as “a three-story modern building, 100 feet square with a warehouse in the rear which covers 40,000 square feet, Commerce and Race streets.” They manufactured tents, awnings, automobile tops, tire covers, and seat covers.

Here it is today, the cool-looking Murray Lofts, between Deep Ellum and Exposition Park:

(I’m not sure if the house in this ad was in Dallas, but I hope so! What a beautiful house! A larger image is here.)

According to a 1962 interview with Otto Coerver — the son of the company’s founder — the factory was built in 1920 just blocks from Fair Park — a location so far “out in the country” that there was no city electric service. Since its founding in 1880, the company had manufactured “bank, office and store fixtures, showcases, hardwood floors and special household and church furniture.” The building still stands, but I’m not sure who occupies it these days. 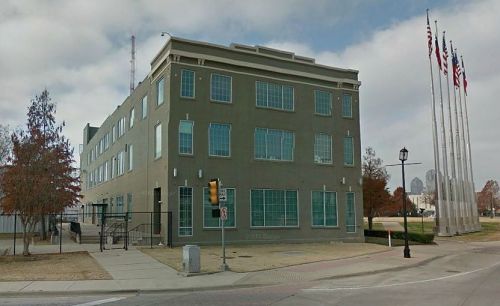 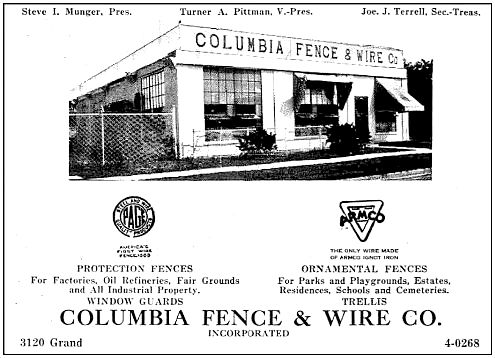 Though it’s been there since at least 1922, this building is one that I have to admit I probably wouldn’t shed a tear over were it to be demolished. Still, it’s been around a lot longer than I have, and I have to admire the fact that it’s managed to hang on for so many years.  After the Columbia Fence & Wire Co. moved on, the building was occupied by a succession of light industrial businesses. In the 1970s it must have gone through quite a renovation, because it became home to a string of discos, including the short-lived Lucifer’s (owned by Dallas Cowboy Harvey Martin), the Plush Pup, and Papa Do Run Run. Below, the current Google street view (the sign above the vacant building says “S. Dallas Cafe”):

All ads from the 1929 city directory. (Apologies for the muddy images. Whenever I post these directory ads, they look great before they’re posted, then something happens during the uploading process, and … argh.)

A continuation — “MORE Random Still-Standing Buildings Featured in Ads From 1929” — can be found here.