This great photograph shows Akard Street looking north from just south of Main. I especially like the sign for “Male Fixings” (a store selling men’s clothing accessories). Let’s zoom in to see that sign better (click photo to see a much larger image). 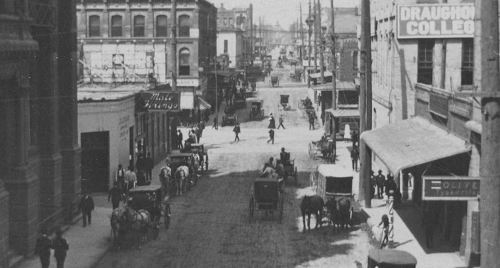 I also like the guy with the bicycle, next to the barber pole at the lower right, and the lone woman crossing the street. (There is a little girl in a white dress on the sidewalk on the right — about to cross Main — but everyone else in this photo is of the gender that might well patronize a business called “Male Fixings.”)

As indelicate as it may be to bring up the subject … I assume there were people employed to walk around the streets with shovels to clean up after all those horses? I’ve actually thought of this fairly often. It had to have been a major, major problem back then. I’ve just looked it up. The average horse pulling wagons and carriages produced, on average, 30+ pounds of manure and several gallons of urine daily, deposited willy-nilly whenever the need arose (which was often). Multiply that by hundreds. This article isn’t about Dallas, but I highly recommend “The Great Horse Manure Crisis of 1894” — you’ll learn way more about the subject than you may want to — read it here. That lady crossing the street? I bet she spent a good part of every day hiking her skirts and dodging dung.

UPDATE: I’ve updated the title to this post several times (you’ll notice that the URL of this post shows a different location and year). After spending time to pin down the date, it appears this photo was taken between 1906 and 1909, when the Draughon Practical Business College was located at the southeast corner of Main and Akard — and the Oliver Typewriter Agency was located at 114 South Akard. The original annotation of this photo says the view is Main Street, with Akard in the midground, but it appears this photo was taken just south of Main Street looking north on Akard. The photo is confusing because the Draughon’s sign is seen here on the Akard Street side, not the Main Street side. The main tip-off is the cupola seen atop the building standing at the northwest corner of Main and Akard — it is the Rowan Building, which housed the Marvin Drug Store, which I wrote about here.

Draughon’s Practical Business College opened its first Dallas campus (but its 27th location across the major cities of the south) at the southeast corner of Main and Akard in March, 1906. By the time the 1910 city directory was printed, they had moved to another location (in fact, in their first ten years in Dallas they had moved five times!). I’m not sure how long the business college lasted in Dallas — at least through the 1970s, possibly longer — but the institution seems to still be in business after something like 130 years. (Click ads below to see larger images.)

This is another wonderful photo from the George W. Cook Dallas/Texas Image Collection, DeGolyer Library, Central University Libraries, Southern Methodist University; it can be accessed (and zoomed in on) here.

Another interesting article on the “manure problem” is “When Horses Posed a Public Health Hazard” — a blog post from The New York Times (which tantalizingly mentions herds of pigs roaming the streets of NYC) — read it here.