Here are a couple of ways developers have attempted to cope with the parking needs of downtown Dallas. I’m not sure how long either of these parking garages lasted, but I give them both A’s for effort.

First, 1945: Nichols Bros. Garage & Rent-a-Car Service at 1320 Commerce (just east of Field). Just look at all these amenities — women and chauffeurs are not forgotten.

I don’t know how long this lasted, but if you’re going to have a garage downtown, it might as well look like that one!

Then in 1954, the 8-story Dallas Carpark at Jackson and St. Paul arrived (a second one at Jackson and Lane was under construction that same year). It was a franchise of the Pigeonhole Parking System of Spokane, utilizing “car-parking machines” invented by Leo Sanders of Spokane, Washington. I’m not exactly sure how these worked, but cars were hoisted and lowered on elevators, and the whole parking process, from start to finish, was conducted without an attendant ever actually touching the cars. Again, I don’t know how long this endeavor was in business (at least through the early 1960s), but — parking-garage-history neophyte that I am — I’ve never heard of such a thing. (There’s a video showing how it worked — thanks, “Not Bob” for posting this in the comments)!

*
UPDATE: “Found” film footage of a family’s trip to Dallas in 1962 actually shows this pigeon-hole system in action. The whole short video is interesting, but the pigeon-hole footage is what got me really excited — it begins at the 1:32 mark.

*
A couple of screenshots: 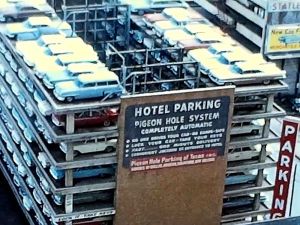 The 1951 Universal Newsreel segment can be found on Vimeo here (thanks to “Not Bob”).

1962 YouTube video of found footage can be seen here (thanks to Robert Wilonsky of The Dallas Morning News for posting this link!).

See photos and read about the elevator-centric Dallas Carpark at Jackson and St. Paul in these Dallas Morning News articles:

See several photos of the “pigeon-hole” parking system in other parts of the country in the article “Pigeon Hole Parking — An Amusement Park Ride for Your Car,” here. Here’s one in Portland, Oregon (the Dallas Carpark was 8 levels high):