The Blue House on Browder 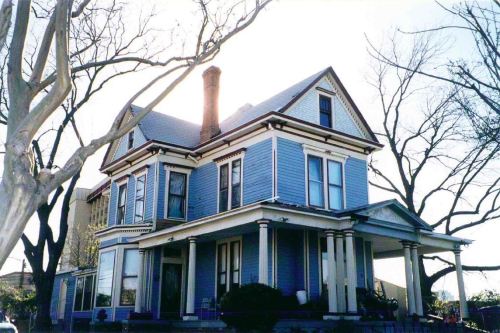 The Rosenfield house, in about 2000 (photo courtesy Homeward Bound, Inc.)

Perhaps you’ve been following the recent brouhaha over the plans to demolish one of the last remaining 19th-century residences in the Cedars area, south of downtown — Robert Wilonsky of The Dallas Morning News has been covering the story here and here and here. The house is in terrible disrepair, but it has the beautiful details of the period, and it’s obvious that it was once a lovely house in a well-to-do neighborhood. Preservation Dallas posted this in-better-days photo on their Facebook page:

I thought I’d see what I could find about the history of the house — mainly I wanted to see if I could find who built it and when.

The house currently has the address 1423 Griffin, but before highways were built and streets were moved around, its address was 1015 Browder. Dallas changed almost every address in 1911, so I checked Jim Wheat’s very helpful scan of that year’s directory which tells us both the new and the old addresses of houses and businesses and also shows what cross-streets those addresses are between. 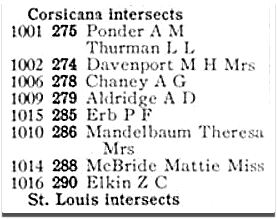 The original address of the Blue House was 285 Browder Street, between Corsicana and St. Louis. In 1911, P. F. Erb was living there.

Next, I checked the Sanborn maps. The earliest Sanborn map I could find which actually showed this part of Browder was the one from 1892. Here’s a detail showing the two-story frame house on the northwest corer of Browder and St. Louis, with Browder running horizontally along the top. The address is 285 Browder. (The house next to it is 169 St. Louis — more on that house later.)

When you look at the full-page map this detail comes from (here), you’ll see larger numbers in the middle of the blocks. The block I’m interested in is block 84. Then I hopped over to the Murphy & Bolanz block book to see what I could find there. (I haven’t actually used this block book much, mostly because my old computer would not work with the plug-in required to view the pages, and it takes a while to figure out what you’re looking at.) When I clicked on “Block 84” in the index, I found this (click for larger image):

Here’s the detail of the pertinent block: 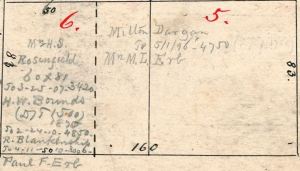 The names and other assorted scrawls indicate title change (I think). This page was very helpful, because it told me that this block was originally part of Browder/Browder’s Addition, and it was originally classified as Block 13. The lot in question is Lot 5 (and probably Lot 6, because Erb’s name shows up under both. So now I had terms to search on.

First mention of this particular parcel of land was in The Galveston News on March 24, 1883. P. S. Browder, a Browder family executor, transferred a lot of property — including the two lots I was interested in — to Mr. & Mrs. Nathan Godbold as part of a quitclaim deed (I’m probably not using the correct terminology here…). For one dollar.

A few inches of print over, the record shows that Godbold immediately sold Lots 5 and 6 to Dallas real estate czar Charles Bolanz (misspelled below). For $1,000.

A few months later, in July, it was reported that Bolanz had sold the adjoining two lots to T. S. Holden, a young man who worked as a salesman for a wholesale grocery firm but seemed to be engaged in land speculation on the side. (It’s a little odd that Bolanz sold it so quickly for a $200 loss, but I’m sure there was probably more to the story.)

At some point, these two lots were sold to Max Rosenfield, another young man who was buying up land in the hopes that its value would increase. From Dallas Rediscovered by William L. McDonald:

“The year 1884 also saw the opening of a new housing subdivision by two Jewish real estate speculators, Gerson Meyer and Max Rosenfield. Their development, bounded by Akard, Corsicana, Browder, and St. Louis streets, was sold primarily to Jewish families who had begun to arrive as early as 1872 as part of the ‘Corsicana crowd’ — the terminal merchants who followed the construction of the H&TC.”

[I couldn’t find anything else about this block being a “sub-division,” but there definitely was a “Rosenfield & Meyer’s Addition” in East Dallas as early as 1886 — see the bottom of this post for more information on Gerson Meyer and the Murphy & Bolanz map of their East Dallas addition.]

In the 1886 city directory, Max Rosenfield is listed as residing at 1118 Browder, which may well have been an address that lasted for a very, very short time — Browder is a very short street, and I wonder if Rosenfield was renumbering addresses in his new development. It does appear to be Lot 5 of the block he and Meyer were developing, though. (Henrietta Rosenfield, widow of Jonas Rosenfield, was Max’s mother, and she lived with or near Max for several years.)

In early 1887, a For Sale ad appeared in the Herald — real estate agents Ducker  & Dudleigh were offering what appears to be Lots 5 and 6. By this time, houses had been built on both lots. (The  numbers 101 and 102 are confusing here, but the property being offered is the lot at the northwest corner of Browder and St. Louis and the lot adjoining it.) The price for the two-story house on Lot 5 was $6,250, which the Inflation Calculator adjusts to being about $166,000 in today’s money, taking into account inflation (but not taking into account Dallas’ outrageous real estate prices!).

It doesn’t look like either property sold, because a few months later, the 1888 directory showed Max still living in the Lot 5 house facing Browder and mother Henrietta living in the Lot 6 house at 169 St. Louis.

Rosenfield placed a For Rent ad in the paper in Feb. of 1889, offering his corner house on Browder.

This appears to have been when businessman Milton Dargan moved in. He is listed as moving into the house at about this time in the addenda section of late changes for the 1889 directory (directories were usually compiled in the year before they were actually published).

In that same directory, Rosenfield had moved in with his mother in the adjoining property.

At some point Dargan bought the corner house. Henrietta continued to live in the St. Louis-facing house until about 1892, when she moved in with Max at his new home on Akard.

That was a long way to go to establish a chain of ownership. (I’m sure it would have been faster and easier to have consulted city records.)

So. Without access to building permits, it looks as if Max Rosenfield (who, by the way, was the father of John Rosenfield — born Max John Rosenfield, Jr. — legendary arts critic for The Dallas Morning News) was the person who built the 130-year-old house now going through the process of probably being torn down soon. It appears to have been built in 1884 or 1885. In a 1935 Dallas Morning News article celebrating the 50th wedding anniversary of Mr. and Mrs. Max Rosenfield, the house is mentioned: “…their first home, a house built by Mr. Rosenfield and still standing on the northwest corner of Browder and St. Louis streets…” (see the article “Mr. and Mrs. M. J. Rosenfield To Observe 50th Anniversary,” DMN, Jan. 6, 1935).

Below is a photo of Max Rosenfield and his new bride, Jenny, probably taken the same year the house was built, 1885-ish, when Max was 26 years old.

Thank you for building such a pretty  house, Mr. Rosenfield. Maybe some magnanimous person with deep pockets can have it moved to a new location and restore it to its former loveliness.

Mr. and Mrs. M. J. Rosenfield, on their 50th anniversary

Here’s a detail of an 1893 map of the area, with the house in question marked.

And here’s the lonely little house in its present hemmed-in location. 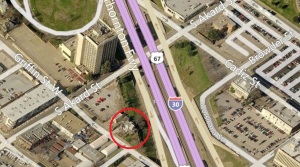 Top photo, taken around 2000, from Homeward Bound, Inc., used with permission. Homeward Bound, Inc. took over the house in 1986 (and owned it until October, 2015) for use as Trinity Recovery Center, a substance abuse treatment center. The organization tried hard to save the house, but, according to Homeward Bound, Inc. Executive Director Douglas Denton, when they approached Dallas’ Landmark Commission in the 1990s, “they were not interested in the building.” Thanks to Mr. Denton for allowing me to use this photo, which shows the beauty of the old house better than any other photo of it that I’ve seen. He points to the photo below as an example of what this Cedars neighborhood once looked like. The caption for the photo in McDonald’s Dallas Rediscovered (p. 125): “Looking north toward downtown along Browder Street near the corner of Cadiz, 1895. These homes, built in the early 1890s, began to be razed in the late 1930s and early 1940s for parking space in the expanding business district.” (Photo: Dallas Public Libary)

This would have been about two blocks from the Rosenfield house. Imagine what that neighborhood once looked like!

Watch a news report on the outcry over the possible demolition of this house on the WFAA website, here.

The Dallas Morning News article on the 50th wedding anniversary of Mr. and Mrs. Max Rosenfield in which it is mentioned that Max built the house (“…their first home, a house built by Mr. Rosenfield and still standing on the northwest corner of Browder and St. Louis streets…”) is “Mr. and Mrs. M. J. Rosenfield To Observe 50th Anniversary” (DMN, Jan. 6, 1935).

Photo of the Rosenfields as a newly married couple found on Ancestry.com.

All other sources as cited.

Max J. Rosenfield died in 1935 at the age of 76. His very interesting obituary (probably written by his son, John Rosenfield, amusements editor of The Dallas Morning News), can be found in the Dec. 2, 1935 edition of The News: “M. J. Rosenfield, Business Leader Many Years, Dies.”

It’s worth trying to figure out how to use the Murphy & Bolanz block books, courtesy of the Texas/Dallas History and Archives Division of the Dallas Public Library. Background on these very useful books can be found here.

If I’ve made any mistakes or have drawn any incorrect assumptions, please let me know!

UPDATE: Max Rosenfield developed a real estate partnership with Gerson Meyer, both of whom worked for Sanger Bros. department store. They bought and sold real estate (often to fellow Sanger’s employees), apparently as a lucrative side-business (Rosenfield even conducted his real estate transactions from his Sanger Bros. office). They apparently had acquired enough land by 1886 to have their own “addition” — “Rosenfield and Meyer’s Addition” in East Dallas. The earliest mention I found of it was this ad from May, 1886.

Their addition was in East Dallas. Below, the map from the Murphy & Bolanz block book (click for larger image):

Gerson Meyer (a Jewish German immigrant, just a couple of years older than Rosenfield), moved to St. Paul, Minnesota in 1897 and continued working for several years in men’s clothing.

16 Comments to “The Blue House on Browder”