Today, a few hand-colored postcards from around 1910 showing the lovely houses that used to line Ervay Street in South Dallas. Hard as it is to believe today, the stretch of South Ervay from just outside the central business district down to its end at Forest Avenue (now Martin Luther King, Jr. Blvd.), was once a very nice area where many of the city’s most fashionable and well-to-do Jewish families (and, later, African-American families) lived. The intervening century has not been kind to South Dallas. I’m not sure of the location in the postcard above, but it certainly looks like a very pleasant neighborhood — one that no longer exists in this mostly blighted area.

Below, S. Ervay looking south. The rounded top of Temple Emanu-El can be seen at the left. The light-colored building in the next block was the Columbian Club. The hotel most recently known as the Ambassador (which is still standing) in set back on a curve of the street and is hidden by the Columbian Club. The red building is the Hughes candy plant (also still standing). A Google Street View of this area today can be seen here.

Below, we see a view still looking south, but now much farther down Ervay, almost to Forest Avenue (now MLK). The church on the left is the James Flanders-designed Ervay Street Methodist Episcopal Church (South), built in 1908 at the corner of corner of Ervay and South Boulevard — it’s interesting that a Methodist church was located in the center of Dallas’ largest Jewish residential neighborhood. (More on the church from a Dallas Morning News article from July 1, 1908, here. See this area on a 1922 Sanborn map here.)

Not seen in the view above is one house worth mentioning. The house — just out of frame at the left, with the steps leading up to it, was the home of Simon Linz, of Linz Jewelers fame. Here is what the Linz house looked like in 1908:

Remarkably, this house is still standing. It is currently a funeral home at 2830 S. Ervay. The present-day image below, showing the pretty house and the neatly landscaped yard, is a little deceptive; see what the Google Street View looks like just south — where the Flanders church once stood — here. (If you’re up to it, reverse the Google view and move back toward town.)

This was once such a beautiful part of Dallas…. 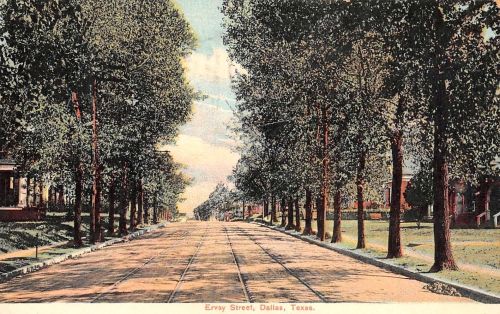 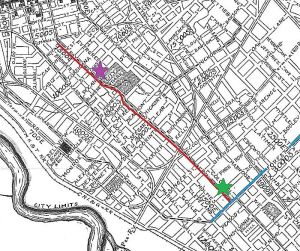 1919 map via Portal to Texas History

First and third postcards are from Flickr: here and here. Others found on eBay.