Wilson & Co., Their Clydesdales, and the Dallas Jaycees’ Safety Committee — 1951 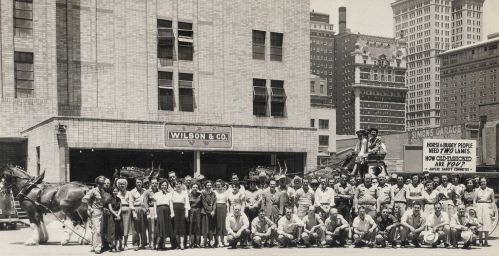 Giant horses at the ready… (click for larger image)

I came across this undated photo a couple of years ago on eBay, and it took a little bit of digging to come up with just what was going on here.

The Wilson & Co. meat packing and processing business began in Chicago in 1916 and quickly became one of the nation’s largest meatpackers, right up there with Armour and Swift. It expanded across the country, and one of its plants was in Dallas — in Unit 3 of the Santa Fe complex of buildings, located on Wood Street, between Field and what is now Griffin. (This building was later known as the Ingram Freezer Building and was demolished in 1988.) The Wilson company was acquired by Dallas-based LTV in 1967, and was later “spun off” from LTV in 1981

The Wilson company had owned a prize-winning “six-horse hitch” of Clydesdale horses since 1917, and they were sent around the country to promote the company and its line of processed meats. Not only were the horses prize-winners at livestock shows, they were also incredibly popular with the public. (They had made a huge splash at the Chicago World’s Fair in 1933, and it seems Budweiser took note of the promotional possibilities of the impressive animals, as the Anheuser-Busch Co. ended up buying the original team from Wilson that same year. So there were at least two competing Clydesdale teams clomping along the downtown streets of America, through at least the late ’60s.)

The photo above was taken when Wilson & Co.’s horse celebs visited Dallas in May, 1951. During their time in Big D they paraded through downtown at noontime and entertained workers on lunch breaks; at night they bunked in temporary stables in the service department of a Pacific Avenue car dealership. The photo at the top shows a public service event in which the Dallas Junior Chamber of Commerce promoted traffic safety in conjunction with the visiting horses. In the photo, the Wilson company employees (who have somehow managed to block the view of several thousand pounds of horseflesh and the huge 1890s wagon behind them) look happy during their little photo-op break from work. And in the background, we see the Adolphus Hotel (…built by the man behind Budweiser beer…), the Magnolia Building, and the Baker Hotel.

All this kind of makes me want a ham sandwich and a bottle of beer…. 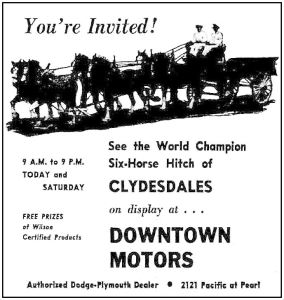 Below, a postcard advertising the appearance of the Wilson “Champion Six-Horse Team” at the 1936 Texas Centennial: 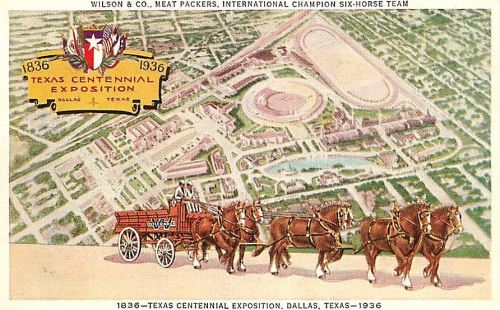 Photo found on eBay in 2014; on the back is the stamp of photographer Denny Hayes.

See an unimpeded view of the famous six-horse team of Clydesdales (each of which weighed, on average, two thousand pounds) in a 1954 Cedar Rapids Gazette photo, here.

A couple of interesting tidbits about the Wilson company and about the horses:

Pictures and clippings are larger when clicked.