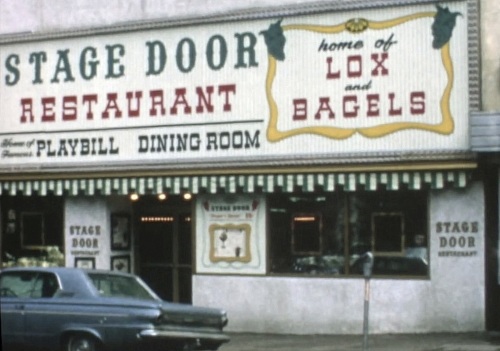 Why does Dallas have so few delis? Here’s one that seemed to be pretty popular in the 1960s: the Stage Door Restaurant and Delicatessen (and bakery), located at 1707 Elm, between the Palace Theater and the Dallas Athletic Club. It opened in June, 1965 and lasted until the end of 1968 (when it was replaced by a restaurant called King Beef). I doubt there was any connection with the famous Stage Deli in New York, but manager Milton Stackel certainly had kosher cred of his own, having worked for twenty years at Grossinger’s, the legendary Jewish resort in the Catskill Mountains. I’m not sure how he found himself operating an eatery in downtown Dallas, Texas, but I’m glad he was here.

To any Milton Stackel-like entrepreneurs out there reading this:

The apparently quite popular eatery was located at/near the old five-point Elm-Ervay-Live Oak intersection (seen here a dozen years earlier — the Stage Door would later be between Lee Optical and Haverty’s). There were two dining areas, one of which was The Playbill Dining Room which served an “international-type cuisine in a Gay Nineties atmosphere.” There was also a thriving take-out deli and the nearby bakery. And now? Come on, Dallas restaurateurs! Get to work! 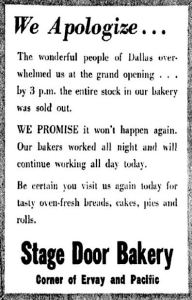 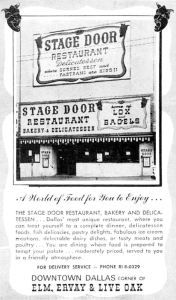 This ad shows the bakery entrance next door. 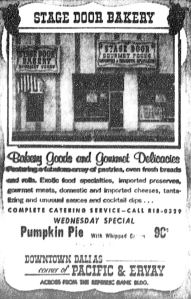 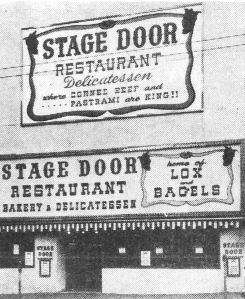 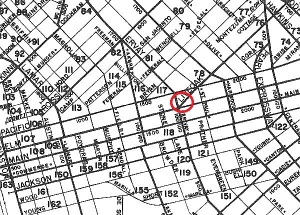 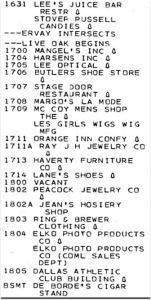 Read more about the opening of the new business (and see a photo of the interior) in the Dallas Morning News article “Stage Door Restaurant Makes Debut in Dallas” (DMN, June 3, 1965).