Above, a photo from a 1911 ad for the United States Coffee and Tea Company, importers and roasters. The text of the ad:

A tril will convince you that our fresh Coffees are superior — Five delivery wagons covering the entire city each day insures prompt service.

The company seems to have been founded about 1908 by George W. Wilson and a very young Henry Seeligson. (Click article to see a larger image.)

According to a 1912 ad (which rather breathlessly promised: “WE ROAST COFFEE EVERY MINUTE OF THE DAY”), the company was the “largest retail dealers in Coffee, Tea, Spices and Butter in the Southwest.”

The photo at the top shows their building at the northeast corner of Elm and Akard; a few years later they moved down Elm to the northwest corner of Elm and Ervay, just a couple of doors east of the Palace Theater (you can see part of their building behind a photo of the Wilson Building here) — this location was once threatened by a fire which broke out in the bakery owned by Frank A. Carreud:

There was a surprising amount of coffee-roasting going on in Dallas in the early decades of the twentieth century. In 1922 the big boys were trying to organize a coffee spot market in Galveston, port to Brazilian coffee and West Indies spices. 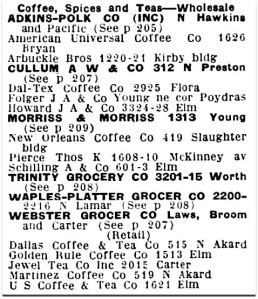 The company was bought by H. L. Hunt’s HLH Parade Co. in 1961; Hunt sold it to the Texas Wholesale Grocery Corp. in 1963 when it appears to have ceased operations under the U. S. Coffee and Tea name. Here’s a photo of a company van sometime before then:

And now I have an intense desire for a cup of coffee.

Top photo from an ad which appeared in a Terrell School yearbook.

Bottom photo from the City of Dallas Historic Preservation Flickr collection, here — the undated photo was taken by the city’s staff photographer.

Sources of other images/clippings as noted.